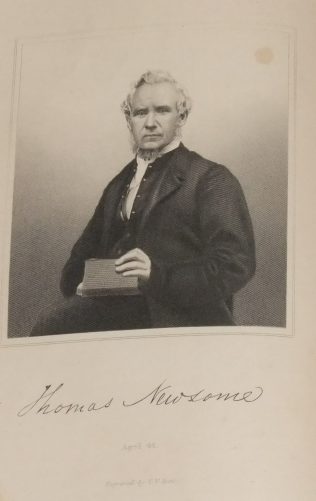 Thomas was born on 3 February 1821 at Morley, Yorkshire. His parents were connected with the Wesleyans. His father died when Thomas was six years old.

Thomas was converted at the age of 13. He went to live with an older brother who was a Primitive Methodist and so joined the PM society. He soon became a local preacher.

At the age of 17, Thomas was sent to Scotland as a missionary. For a short time he laboured with great success and acceptability. However he felt his youth and inexperience and returned to England. In 1839 he became a probationary minister in Halifax.

Reading his obituary one gets the impression that the writer felt that Thomas didn’t entirely fulfil his early promise as a preacher. He appeared to lack self esteem and confidence which held him back. A large family and small salary also prevented him from aquiring such a library as he needed to develop.

His preaching was not contraversial or doubtful or merely speculative; it was positive , pointed and practical. Thomas much preferred devotional meetings to those concerned with business!