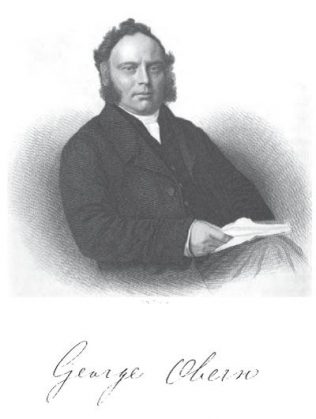 George was born on 14 January 1814 at Stoke St Michael, Somerset.

He was converted at the age of 19 and was used as an exhorter within two years. He was initially employed as a hired local preacher by his own Frome circuit before becoming itinerant.

His obituary records that his life and teachings were a flame with the fire of devotion.

Newspaper Announcements of his Death

Sudden Death of a Minister in Chapel

A painful instance of sudden death was witnessed a few nights since in a Primitive Methodist chapel just erected at Greenham, near Newbury. At the opening of the chapel a large number of persons celebrated the evening by a public tea and meeting, at which several ministers delivered addresses. Among speakers was the Rev. George Obern, an elderly minister long identified with the cause of Primitive Methodism in the neighbourhood.

In the course of his address he remarked that when Caesar lived the Romans had nothing to fear, and reminded those to whom he was speaking that as Jesus was the captain of their salvation, ever pleading for them, they need not fear if they faithfully served him. He rejoiced that they could feel that Jesus would be preached in that new chapel as the sinner’s only hope and refuge, and having uttered the words, ” Nothing but Jesus,” his voice ceased, and he fell back into the arms of the Rev. Edward Alford, and in a few minutes breathed his last in the presence of the large congregation, who were thus thrown into a state of much painful excitement.

The people quietly withdrew, and the corpse was left in the chapel to await the inquest before the district coroner, which was held when the medical evidence showed that apoplexy was no doubt the cause of death, and the Jury returned a verdict accordingly.

The funeral of the late Rev. G. Obern, whose sudden death occurred at Stroud Green Chapel under circumstances recorded in last week’s issue, took place on Friday afternoon.   The body was brought down from his place of residence to the Chapel in Bartholomew-street, where a service was held conducted by the Rev. G. Wallis.  There were a number of persons present, most of whom were attired in mourning.

The service commenced with singing the hymn “farewell, dear friend, a long farewell”, and during the proceedings there were also sung the hymns commencing “Come let us join our friends above”, “Shall we gather at the river”, and “Safe in the arms of Jesus”.  An address was delivered by the Rev. D. Harding, of Basingstoke, who had known Mr. Obern for a period of 26 years.  His first thought – almost wish, he might say – was that he might have gone Home with his departed friend.  Still he was desirous to stay and do a little more work in the service of his Lord and Master.  The more conspicuous traits in the character of their departed friend was his childlike simplicity, his prayerful disposition, making a point of offering up prayer wherever practicable before leaving any house he might visit, and his firm belief in God and his promises.  Perhaps few amongst his ministerial brethren were more honoured of God in the conversion of sinners, and he hoped the mantle of their deceased friend might fall on his younger brethren.  Mr. Harding concluded – “I feel no regret for him, I shed no tears at his departure: for his death was a translation – he was not for God took him”.

The Rev. F. Robertson spoke of some of the solemn lessons to be deduced from this solemn event.  One was that our times are in God’s hands and that we should be prepared for death, however and wherever the summons might come.

The Rev. J. Ingham dwelt upon the comfort to be derived from the death of the righteous and subsequent resurrection to eternal life.

On the conclusion of the service the body was removed to the hearse, and proceeded to the Cemetery, the cortege being headed by several ministers, some of whom had travelled many miles to be present at the mournful ceremony.  Four superannuated ministers acted as pall bearers, and the bearers were chiefly local preachers.  A large number of friends of the deceased and others to whom he was known, both meal and female, followed, rendering the procession on of unusual length.  The service at the grave was read by the Rev. T. Cummin.

On Sunday evening, at Stroud Green, there was a “memorial” service.  The preacher was the Rev. E. Alford, who claimed the deceased as his spiritual father, he (Mr. Alford) having been converted in a revival eighteen years ago in Dorsetshire when some hundreds were brought to a knowledge of the truth, Mr. Obern at that time labouring in that neighbourhood.  The chapel was crowded, and many could not obtain admittance.  It was announced that the funeral sermon would be preached on Sunday evening next at Bartholomew-street Chapel.

Edward Alford said – I am minister of this chapel, which is a Primitive Methodist Chapel, and has been recently erected.  The opening services, which commenced on Sunday, were continued yesterday, when there was a tea and public meeting.  The deceased was present as one of the ministers appointed to take part in the meeting.  Our meeting commenced about half-past six, and was first addressed by Mr. G. Moss, of Reading; then by the Rev. E.W. Shalders, Congregational Minister of this town; next by the Rev. John Leach, of Hungerford; then by the Rev. W. Rowe, who is now present; next by the Rev. F. Robertson; a collection was then made on behalf of the funds of this building.  This would be about half-past eight.  As Chairman of the meeting I said I thought it would be well to separate as the building was not very dry; but stated that Messrs. Obern, Cummin, and Wallis were appointed to deliver addresses, and if the friends wished to remain, I had no doubt these ministers would deliver short addresses.  I observed the congregation was anxious to hear those gentlemen, so, after making an announcement as to future services, I called on Mr. Obern to speak.  He had taken an interest in this building, and expressed pleasure at being present.  He spoke for about ten minutes – not longer.  I observed that at the commencement he spoke a little louder than he usually did; but he appeared to be under no special excitement.   At the close of his address he turned round, as I thought, to sit down, but reclined against myself and Mr. Robertson, the Baptist Minister.   I immediately thought he had a fit of some kind.  We tried to get him placed on the seat of the rostrum, but experienced difficulty.  He made a slight noise once, as if groaning, but it was not very loud.  A medical gentleman was sent for; and after a time Dr. Ryott arrived.   Our opinion before the doctor arrived, was that he was dead.  I believe Mr. Obern to be a little over 60.   He was a superannuated Primitive Methodist Minister, and resided at Montague Place, Newbury.  I have known Mr. Obern for 18 years.  He was laid aside from his official duties about four years ago, in consequence of an apoplectic stroke.

Mr. F.E. Ryott, of Newbury, surgeon, said – Last evening I was requested to come to the Chapel at Greenham to see a minister who was thought to be in a fit; on reaching the chapel I found Mr. Obern was dead.  I have since ascertained from his wife, that deceased had an attack of apoplexy and paralysis some three years ago, and I have no doubt from the excitement of speaking a blood vessel was ruptured on the brain causing immediate death.  The death would be from apoplexy.

Mr. Alford explained that Mr. Obern usually spoke very quietly at the commencement of his address, and that on the present occasion h was slightly above his usual tone of voice.

The Jury without further deliberation returned a verdict of death from apoplexy, and at the suggestion of the foreman, kindly handed their fees to Mr. Alford towards a fund being raised for the widowed daughter of the deceased who with her children were dependent upon him.  The Revs. W. Rowe and F. Robertson were also present at the inquiry.  The funeral, we are informed, will take place on Friday afternoon.  There will be a service at the Bartholomew-street Chapel at 2.30, and the body will then be conveyed to the Cemetery for interment.