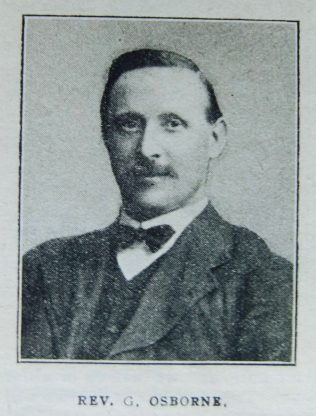 GEORGE OSBORNE: born at Newport, Glamorgan, in 1880. After training at Hartley College, he entered the Primitive Methodist ministry in 1907. His personality was strong and gracious, his preaching able and evangelistic, and in an all things he was ever concerned to commend his Saviour to others. Possessing a genius for friendship and the heart of a true pastor, he was a faithful and welcome visitor to the homes of his people. He had distinct administrative gifts, and contributed much to the success of Methodist Union in Birkenhead. A keen musician, he revealed talents as conductor and composer in the service of his Lord. He both wrote and produced religious plays and pageants, an to the end retained a lively interest in manly sport. Happy in his home and held in deep affection by many outside the family circle, he spent the last seven ears of life in retirement in the Birkenhead circuit. Failing health did not allow him to share active work, but he loved the House of God, and continued to show his deep concern for the people and the Church he had served with ability and devotion. After but ten weeks of separation, he was reunited with his beloved wife when, on July 7, 1953, he followed her into the Homeland in the seventy-third year of his age and the forty-sixth of his ministry.

George was born in 1880 at Newport, Glamorgan, to parents Samuel and Sarah. Samuel was a boot and shoe manufacturer. George also worked as a shoemaker before entering the ministry.