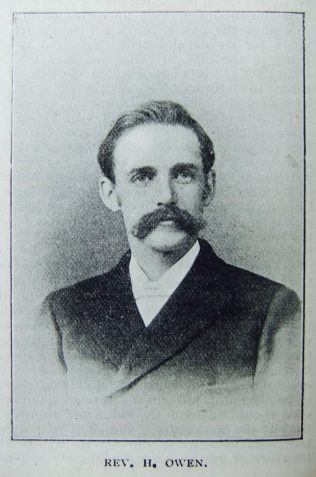 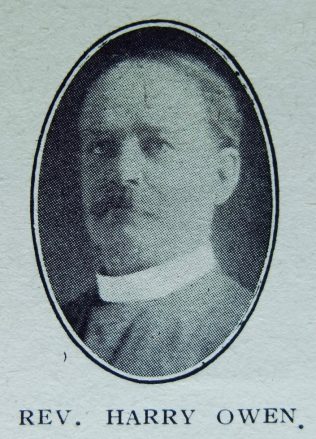 Harry Owen died in Redwood City, California, U.S.A. on January 26th, 1926, in his fifty-eighth year. A native of Shropshire, he was converted in our Ketley Chapel, Oakengates Circuit, when quite a youth. In Sunday School and Church he soon gave promise of usefulness, and in his teens became a local preacher. In the latter capacity he revealed distinctive gifts and became successful in soul-winning. The circuit officials were soon convinced he would make an able and successful minister of the Gospel, and he was urged to prepare for the ministry. The late Rev. Richard Clarke, of whose kindness and guidance he always spoke in the highest terms, gave him all the assistance he could. In 1890 he successfully passed the candidates’ examination, and after a year in our College at Manchester commenced his ministry in July, 1891. His first station was Burnley I., where he stayed two years. Unfortunately he had a breakdown during his first year, which necessitated several months’ rest and a sea voyage. After Burnley he served two years at Longton, where he finished probation. Subsequently he served Prees Green, Crewe, Cardiff I., Hereford, and Sparkhill, Birmingham. While stationed at Cardiff he went on a preaching and lecturing tour in America, and everywhere received a great reception. One of the American Universities conferred upon him the Degree of Doctor of Divinity. While at Sparkhill in 1912 he had another breakdown and, obtaining leave of absence from the Conference, went to America in search of health. In 1914 he returned and was stationed to Birmingham IV., where the following year he collapsed and was compelled to seek superannuation. He went to California in the hope that in the warmer climate he might regain something of his old vigour. As soon as he was well enough he accepted preaching engagements, and served the Methodist Episcopal Church as supply. He won for himself a considerable reputation as a pulpit orator, and the best pulpits were open to him. His heart, however, was in the Old Country, and when Hereford Circuit, in 1921, invited him to return to the scene of his former triumphs, he applied to the Conference for permission to resume the active ministry. He began his work again at Hereford with characteristic fervour and enthusiasm and things were shaping well, but in less than two years came another breakdown. He sought a year’s rest, in the hope that he might recover, but the specialist’s opinion was unfavourable, and at the Conference of 1924 he was superannuated. He returned to California and for a time his health improved, and he began to preach again as a supply in the Methodist Episcopal Church. His services were greatly appreciated and he was largely instrumental in raising funds for, and superintending the erection of, a new church In Redwood City. In his last letter to me he said, “I am not well, and am working with the knowledge that the call may come at any moment. The new church had just been opened when he was stricken down. He was taken to a nursing home but, notwithstanding the best medical skill and the devoted attention of a loving wife, he passed away. The new church, for which he had laboured so strenuously, was crowded for the memorial service, and eloquent tributes were paid to his life, character, and pulpit abilities by leading ministers of the district.

Harry Owen was a hard worker. Though dogged by ill-health for many years, he did not spare himself but gave of his best to every church where he ministered. On all his circuits he was successful and won the confidence and affection of his people. He was able invariably to report progress. He was greatly beloved, and his friendship was highly prized by many. He had a magnetic personality, and could enthuse and inspire an audience by his eloquence. If his health had not been so uncertain there was no position in our Church to which he might not have aspired. He was immensely popular, not only as a preacher but as a lecturer and speaker at religious and temperance demonstrations. His services for “specials” were always in great demand. Thoroughly devoted to his Lord, there was nothing he loved so much as to proclaim the Evangel of Divine grace, and he witnessed the conversion of hundreds of men and women to Christ. He had real literary gifts and contributed many articles to the Connexional magazines and other periodicals. His sun went down while it was yet day, but the day had been crowded with consecrated toil for the Master he loved.

His wife, a daughter of the late Mr. W. Smith, of Audlem – mourns his loss in Redwood City, but must be greatly comforted by the knowledge that he could never have accomplished all he did had it not been for her loving and tender care of him. May the consolations of God be hers!

Harry was born in 1868 at Wellington, Shropshire, to parents Edward and Elizabeth. Edward was a boiler maker.