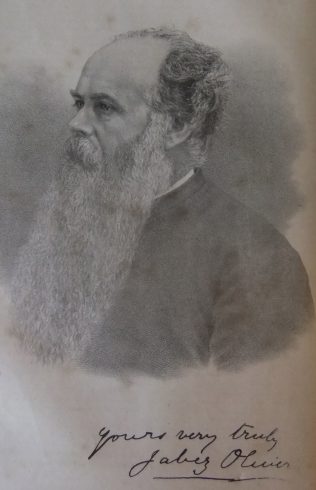 Jabez was born in November 1834 at Donington Wood, Shropshire to parents Thomas and Eliza. Thomas was a miner. Eliza was a Primitive Methodist.

Jabez was converted aged 14 and was on the plan in 1852 in the Wrockwardine Wood circuit. He supplied for the 3rd minister in the circuit for a while and was judged to have done well. He was recommended for the ministry.

His first appointment was to Tredegar. Jabez spent 24 out of his 37 years in active ministry on the ground covered by that original circuit.

His obituary records that Jabez had a pleasing appearance, a good voice, and a genial and winning manner. As a preacher he was solid, practical, and instructive: his aim was not to impress his hearers with his own importance and skill, but to save and edify, and many were converted under his ministry. He was conscientious, painstaking, and methodical in all business matters, taking an intelligent and deep interest in the general welfare of his stations.

He shrank from official position outside his stations, preferring to use his time and talents in developing their resources.

Jabez died suddenly shortly after taking up his appointment at Glastonbury.