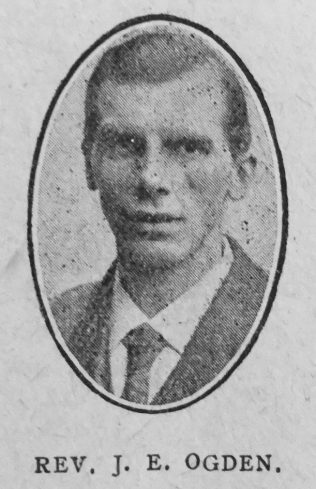 JOHN EDMUND OGDEN: born in Bradford, Yorks., in 1887, he was educated at Hanson Secondary School. He offered for the Primitive Methodist ministry, and was trained at Hartley College. He was sent as a probationer to the Whitehaven Circuit and there followed terms of service in Ludlow, Ellesmere, Bolton II, Morley, Pocklington, Castleford, Newbury, Minsterley, Bradwell, Martham, Silchester. On retirement he settled in Basingstoke and he and his wife became associated with the Sarum Hill Church. His wife died in 1966, and soon after this he moved to Higham for the last years of his life. Those who experienced his pastoral care could speak feelingly of his ability to give cheer, encouragement and comfort. Those who were privileged to sit under his preaching had revealed to them a dedicated spirit, a cultivated mind, a caring heart, and a passion for his Lord. He was loved by the young, for he loved them, being evergreen in spirit. He was born into the conflict which burned fiercely in Victorian days – the rift between science and religion. He was passionately interested all his life in the search for truth, and came to such a strong, clear vision of the reality of God that he never doubted that if the truth was an evolutionary rather than a divine spontaneous creation it was nevertheless still a part of God‘s pattern. He had and inspired in others a faith in God which dispelled doubt and fear. He was a shrewd business man, who would have made a notable actuary. He was an active and expert gardener. His was a rare and rich personality. He died peacefully in his chair after a short country walk on 3 March 1971, in the eighty-third year of his age and the fifty-seventh of his ministry.

John was born in 1887 at Bradford, Yorkshire, to parents John and Mary. John, senior, was a coal merchant in 1911.

John worked as a clerk and warehouseman before entering the ministry.