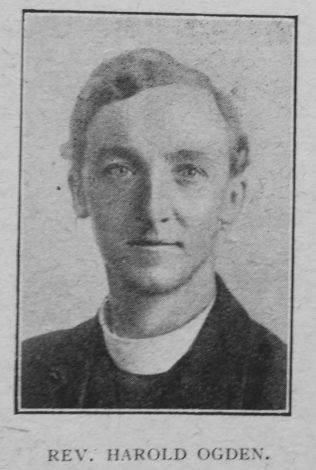 HAROLD OGDEN: born at Bolton, Lancashire, in 1885. He served some time as an engineering apprentice, but on becoming conscious of the call to full-time Christian service, offered for the Ministry, and after acceptance was trained at Hartley College, Manchester.

His first pastorates were in South Africa, but he later returned to this country and served in Bournemouth, Romsey, and, for a short period during the first World War, as an army chaplain. In 1919 he resumed circuit work at Chalfont, Reading, Goole, Manchester, and Northwich. He became a Supernumerary in 1953, but from then until his death he served at the Wokingham church in the Reading Circuit as an active supernumerary.

A mere outline of his itinerancy gives little indication of his worth, although the length of his terms in some circuits reveals how much his people loved him. He leaves a very fragrant memory in the hearts and minds of many folk up and down the land because of his most loving and tender pastoral ministrations. He exemplified Von Hugel’s dictum that Christianity is caring. Many can testify that he cared for them when they most needed a minister’s help and comfort. He was a most charming and helpful colleague, thoughtful and studious, an able preacher, and a capable administrator.

He died very peacefully on 20 August 1958, in the seventy-second year of his age and the forty-seventh year of his ministry.