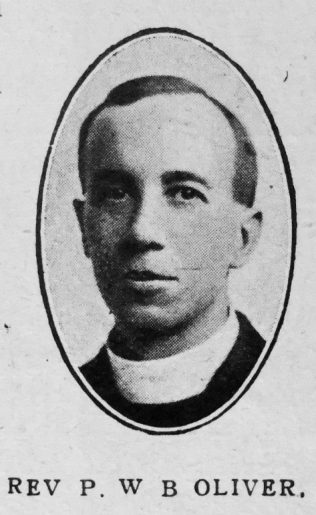 One of the admirable things about many of our earlier ministers was the attention they gave to the education of their children. Just what that represented in sacrifice none ever knew, though many guessed. The subject of this sketch was fortunate in that his parents gave him of the very best they could afford. An only son of the late Rev. Henry Oliver, who himself had a fine record of forty- six years active ministry, Percy received his education at Bedford Modern School, Deacon’s School, Peterborough, and Bourne College, Quinton. Whilst there he held the Conference Scholarship; took the London Matric, and remained afterwards for two years as Junior Master. Such a preparation was an excellent equipment for work at Hartley College, where he spent two years.

A minister’s wife once remarked: “We haven’t much money but we do see life.” And she was right. What other vocation sends a man from city to hamlet, from the smoke of great industrial centres to the wind-swept, sunlit spaces by the sea as that of a Methodist minister? Mr. Oliver began his ministry at Leeds, and next pitched his tent on the Isle of Wight. Probably Conference was responsible for these appointments, and it is all in the way of preparing the man to be ready to accommodate himself to anything.

But ministers, like pigeons possess the homing instinct, and whilst minister’s sons are not as other men in having struck roots deeply in a native soil, yet there are Districts and Counties that call, and the flight from Cowes ended at Beverley, which was served for four years, as were Wombwell and Lincoln 1. afterwards. Louth, the native circuit of his father, is his present sphere, made for ever memorable to him by the flood, and where he has promised to remain a fifth year.

A devoted and thoroughly efficient circuit minister, winning esteem and affection by sterling qualities of mind and heart, Mr. Oliver has served his District as C.E. Secretary and is now Sunday-school Secretary. He has “passed the chair ” of the Synod, being President at Winterton this year, and has served as G.C.D. when the Conference met last at Hull. With such an ancestry and such a training, Mr. Oliver’s ministry should be one of increasing power.

PERCY WILLIAM BENJAMIN OLIVER: born in Petersfield in 1879, son of the Reverend Henry Oliver. He was educated in Bedford and Peterborough and latterly at Bourne College, Quinton, for which school he always retained an abiding affection. After training at Hartley College he commenced his ministry in 1903, travelling in the following circuits : Leeds, Newport and Cowes, Beverley, Hoyland,Lincoln, Louth, Clay Cross, Southend-on-Sea, Norwich and West Bromwich. Blessed with rich administrative and pastoral gifts, he used these fully in the circuits and districts to which he was appointed. Of all his circuits, he had a deep love for Louth where he found the lady who shared his life and ministry for almost forty years. Anyone connected with that circuit could claim his instant interest and friendship. After forty-two years in the active ministry, he gave a further seven years of pastoral care in the Birmingham Mission, retiring to Godalming in the Guildford circuit in 1952, where as preacher and class-leader he exercised a gracious influence in the evening of his days. He read widely, thought deeply and spoke wisely concerning the problems and opportunities of the day and was a vivid conversationalist. Ever happy to share his knowledge, he found nothing too much trouble if it would help his brethren or his people. Within ten days of his passing, in writing to a former Godalming minister, he took the trouble to write out in full a hymn containing a quotation of which they had often spoken, but never fully traced. The action was entirely characteristic of the man, as are the words of his faith –

Let me no more my comfort draw
From my frail hold of Thee-
In this alone rejoice with awe:
Thy mighty grasp of me.

That grasp surely did not fail him when he died in hospital after a short illness on 2 January 1964, in the eighty-fifth year of his age and the sixty-first of his ministry.

Percy was born in 1879 at Petersfield, Hampshire, to parents Henry Oliver and Emma Moore. Henry was a PM Minister.