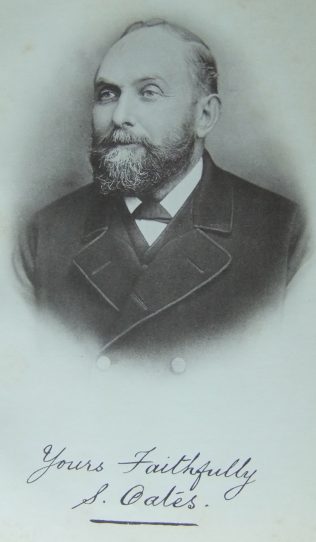 Stephen was born on 12 November 1836 at Burringham, Lincolnshire to parents George Oates and Arabella Johnston. His father was a farmer who did not profess any religion. His mother was a Wesleyan. Stephen was one of a large family of sons, several of whom became local preachers.

He was converted, aged 18, during a revival in the village and joined the Primitive Methodists. After six months he started to take appointments on the plan.

Stephen served an apprenticeship as a tailor within his village. At the close of his apprenticeship, Stephen moved to Brigg and in 1859 was recommended for the ministry.

The 1890 biography records that Stephen possessed a good library, which he used wisely and well. His sermons were carefully prepared, while his delivery was free and unfettered. He had no taste for learned or metaphysical discourses, but delighted in dealing with the great and simple truths of the Gospel, and was always at home when treating the parables and narratives of the Evangelists and the historical portions of Holy Scriptures.

Stephen’s obituary records that he was of a friendly disposition and generous to a fault. His wise counsel and willingness to assist all who needed help won for him many friends. He assiduously attended to the spiritual and financial state of his circuits.