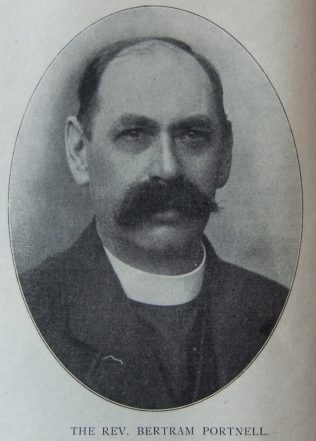 Bertram was born in 1869 at North Waltham, Hampshire, to parents Charles Portnell and Mary Sarah Phillips.  Charles was a PM Minister.

Whilst at Poplar as a probationer, Bertram became a student at New College.

Whilst in Kent, Bertram was active in his opposition to Mr Balfour’s Education Act, and as a consequence was honoured with a period in gaol as a Passive Resistor.

At Poplar, in 1912, there was considerable distress in consequence of a great dock strike. Bertam was instrumental in distributing the relief funds of two London newspapers, redeeming goods pawned, feeding hungry children, issuing food tickets, giving away old clothes and supplying barefooted lads with new boots; whilst continuing to manage the ‘ordinary’ work of the Church.

Bertram had a strong and unique personality. His capacity for friendship was outstanding. He seemed intimate with everybody who were sick and poor. A real shepherd of souls, no hour was too late or distance too great for his ministry.