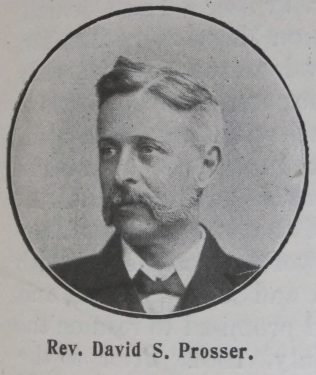 David was born in 1848 at Congleton to parents James Prosser and Mary Hewitt. James was a PM Minister.

David’s obituary records that he recalled a visit of Hugh Bourne to his father’s house. Hugh Bourne laid his hand upon his head and bade him to be a good boy.

At the age of 15, David attended Elmfield College at York. John Petty’s wise and helpful counsel led to his conversion during the college term.

His ministry was eminently successful as was often evidenced by increased membership, the reduced financial liabilities, the improved properties and the healthy spiritual position he was able to report.

As a public speaker he was exceedingly popular. His pulpit efforts were gained by clear and convincing discourses of a distinctly evangelical character always calculated to meet the needs both of the intellect and heart, and delivered when at his best with an eloquence that few could surpass.

He was an excellent debater and had great administrative ability.

David was Secretary of Conference in 1899 at Grimsby, having previously been Assistant Secretary at two previous conferences.

He rendered considerable service to the Liberation Society and took a lively interest in the work of the National Council of Evangelical Free Churches. David was a powerful temperance advocate and frequently appeared on the platforms of the United Kingdom Alliance.