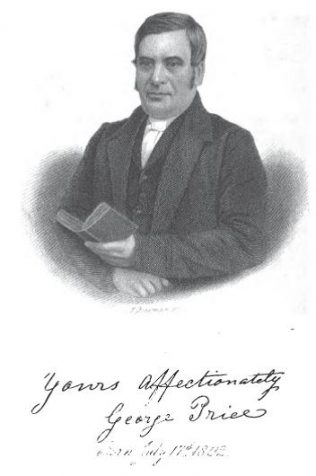 George was born on 17 July 1802 at Radnor, Wales. George found himself convicted of his sin in late 1826, but it was not until 9 March 1827 that his conversion was completed. In June of that year he became an exhorter on the plan. He worked for two years as a local preacher before travelling.

Petty records that George and others purchased a larger chapel at Newbury in 1831 because the society formed by Thomas Russell could no longer fit into the preaching room that had been originally used.

In 1835 George worked with William Harvey and William Peacefull to mission the area in and around Abingdon.

In 1836 George and J Jeffries were the first missionaries to visit Aylesbury and surrounding district. On Sunday 10 April, George preached at Wingrave at ten o’clock, at Weedon at half past one, at Whitchurch at half past four and at Hardwick at half past six, each time in the open air. On repeating this circuit on 8 May, he wrote; ‘This has been a day of labour; I have preached four times in the open-air, led a prayer meeting, prayed with seven families, and walked seventeen miles’. Within 2 years upwards of 200 members were in fellowship within that mission.

Although they did not experience violent persecution at Aylesbury they had to ‘deal with inertia and spiritual sluggishness’.

His obituary records George as a strict disciplinarian; he was a leader from the front. He took his pastoral work seriously often visiting 10-30 families each day. George observed Fridays as a fasting day and day for spiritual exercises.