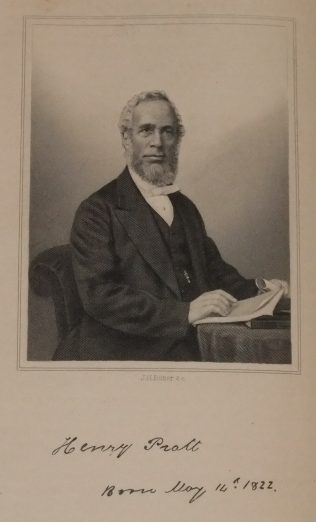 Henry was born on 14 May 1822 at Benwell, Northumberland to parents Henry Pratt and Susanna Willey.

Henry had very little education as a child. In early life he was thoughtless and irregular in his conduct, delighting in the desecration of the Sabbath. He was influenced by Wesleyans to realise his need of salvation, but it was not until Primitive Methodists visited Benwell in 1841 that he was converted.

Immediately Henry joined a class, and regularly paid his contributions, taught in Sunday School, distributed tracts from door to door, invited people to preaching services, opened the chapel doors, lighted the candles and swept the floor of the mission house. He became a local preacher a year after his conversion and entered the ministry three years after that.

Henry was well known in the North of England but never figured as a connexional officer at Conference.

His obituary records that he was possessed of great powers of endurance, and few of our younger men could equal him in travelling those long distances so familiar to our early preachers. He was an exceptionally good businessman, and was very strict and methodical in all his ways.

As an open air speaker he excelled. As a preacher he was effective in his presentation of the fundamental principles of Christianity; and in the prayer meeting, after the Sunday evening service, he was at his best, leading sinners to the Lord Jesus Christ.

Henry died on 27 October 1888 in the Royal Infirmary, Edinburgh, 10 days after having had an operation on his face.