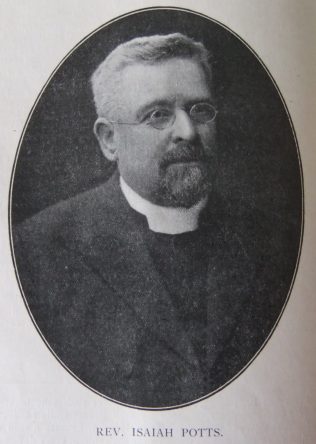 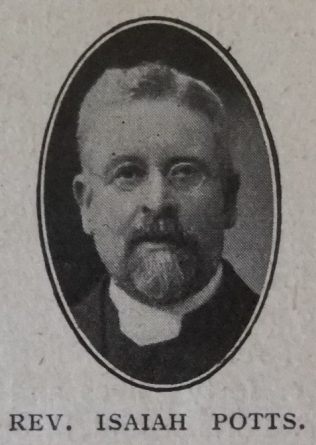 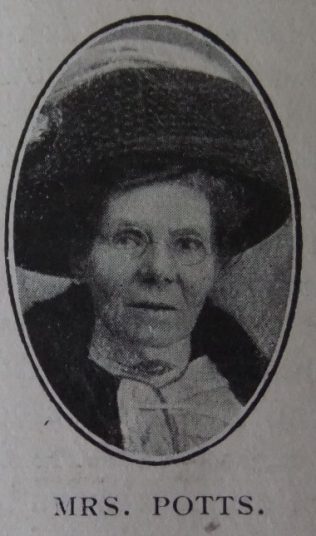 Isaiah was born on 14 August 1845 at Tollend, Tipton, Staffordshire to parents William and Ann. Isaiah was baptised on 14 September 1845 at St Leonard’s, Bilston, Staffordshire. William was a miner. When Isaiah was six, the family moved to Broad Lanes, near Bilston, and he attended the PM Sunday School. He was sent out to work, fourteen hour days, at seven years of age.

Isaiah was converted during a revival in 1859 and became a member of the Primitive Methodist Church on 27 March 1859. He became a local preacher at the age of seventeen.

Before entering the ministry, Isaiah was a forgeman.

The Bilston circuit recommended Isaiah for the regular ministry in December 1873. The Wolverhampton circuit gave him a call to be the second preacher and he commenced his labours in February 1874. In August 1875, Isaiah moved to the Manchester Mission, City Road and met with great success. After eight months, the General Committee appointed him to York, and he was pledged by that circuit at the 1876 Conference.

During his ministry burdened trust funds received his special care, and thousands of pounds were raised under his guidance. During his stay at Keighley Second, £3,600 was raised in one year.

As a preacher, Isaiah was thoroughly evangelical and Methodistic. He declared the great living truths of the Gospel with passionate earnestness and abandon. As a preacher he was popular, and as a lecturer he was much sought after.

During his ministry in Filey there was a mighty spiritual awakening, the whole town being deeply moved, and great numbers were added to the Church.

Isaiah was a delegate to the Ecumenical Methodist Conference in Toronto.

Isaiah superannuated in 1914, but in 1916 took up the work of full ministry again, and was stationed at Leintwardine until his health gave way again in April 1919.

Isaiah died on 2 December 1919 at Filey, Yorkshire, whilst visiting his son.