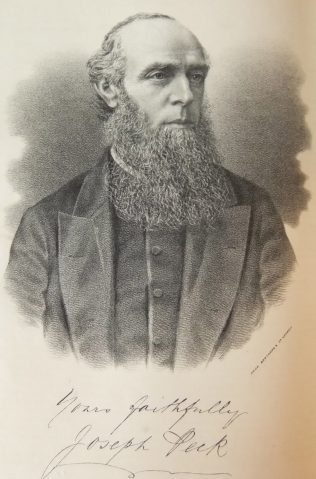 When he was young, Joseph’s parents moved to Gallywood, Essex. Until the age of 14, Joseph attended the parish church. He was converted after being given a tract by a passing distributer whilst he was working in a field.

Shortly after conversion, Joseph moved to Chelmsford where he joined a Wesleyan society (September 1850), but soon afterwards he switched to the Primitive Methodists. He became a local preacher and received calls to the ministry. Joseph accepted on the third call.

At Teignmouth, Joseph suffered considerable persecution for preaching in the open-air. Through listening to George Müller of Bristol, Joseph developed a passion for a connexional orphanage. He did a lot of research into how various homes operated

An old chapel at Alresford, Hampshire was purchased in 1886 by Joseph from Mrs Ownslow for the sum of £500. It was to be used as an orphanage, a new venture in child-care by the Primitive Methodist Church. He was the founder and first secretary of the orphanage, which opened in 1889.

Joseph’s obituary records that he was not physically robust, but he was a good industrious servant of his Lord. His preaching was methodistic and earnest. His visits to the homes of the people were frequent and much appreciated.

Joseph married Hannah Stoneman (b abt 1844) in the summer of 1862 at Teignmouth, Devon. Census returns identify eight children.