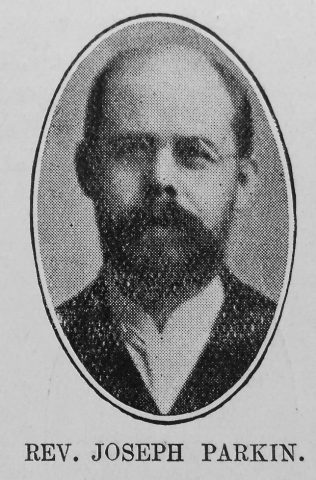 In the midst of his years and just as he was entering the great work of his life, Joseph Parkin passed away and by his death a life of great promise and large hope is lost to the Church and the world. He dies early and leaves unfinished the work he had planned and to which the Church had called him. Events like these deepen mystery and create necessity for faith and immortality.

Joseph Parkin was born at Greenwick, Ripley, September 14th, 1868, and died at Wigston Magna, Leicester, May 30th, 1909. His parents removed to Alfreton, Derbyshire, when he was very young and joined our Derby Road Church, in which he was trained and converted and began Christian service.

Very soon he showed signs of ability and usefulness, and was made a local preacher. It soon became evident that he had special fitness for larger service and he himself felt in his own soul the call of God to preach, which to him was sufficient and final authority. At the age of twenty-five he gave himself to mission work, and for about nine years laboured as an evangelist in different parts of the country. His first call was to Hinckley Circuit in Leicestershire, where he laboured for some time with great acceptance and usefulness. Thence he removed to Clapton Mission, London, of which Rev. Thomas Jackson  was superintendent. Here he stayed five years and did excellent work in the slums of Whitechapel, for which he received cordial recognition from men in high places as well as the love of those he helped to lift. Mr. Jackson speaks of his character and work in highest terms; and it was with great reluctance he gave him up for mission work elsewhere at the request of the General Missionary Committee.

From London he went to Newtown, North Wales, to take charge of our mission there, which was very weak, and he had to face great difficulties and hard struggles. Here for about five years he was very successful, and the influence of his life and the result of his work abide for healing and guiding. To-day he is in the thought and life of that circuit, a living power making for righteousness and goodness.

While on this mission he became a candidate for our ministry. When the opportunity was given he proved himself equal to the test and passed his examinations with acceptance and credit. From Newtown he removed to Hemsworth Mission, Yorkshire, where he laboured with great success for two years, winning the confidence and esteem of the people. Here he finished his probation and entered the full ministry. He next received a call to Wigston, Leicester Second Circuit, where we have a very strong church. Here he laboured with great devotion and success for nearly two years, and here he finished his course and passed to the honour of reward and coronation.

He was a man of strength and devotion, of deep spirituality and conscientiousness. He lived in the high places, had lofty ideals and was influenced by the Divine Spirit. The questionable to him was the impossible. Christ and conscience had large place and great power in his life. He was devoted and useful in any sphere of Christian service, but he was specially fitted for, and very successful in, mission work. To this form of service God had undoubtedly called him, and to this he was willing and even anxious to give himself.

He had already consented to go back to Hemsworth Mission after Conference, and looked forward to facing the difficulties and the hard work with pleasure and hope. But life ended and the worker leaves before his work is done. Some one else must take his place and do the work he ought to have done. He died too soon. His life was short, but full and fruitful. This life is very incomplete, and, therefore, cannot be final; the final must be complete, and in it there must be explanation and satisfaction. Until that day shall break we rest in God and wait in faith and hope.

Joseph was born on 14 September 1868 at Greenwich, Ripley, Derbyshire, to parents Jacob, a wood sawyer (1861), and Elizabeth.

Before embarking on his mission work, Joseph was a railway clerk (1891).

He married Rosina Elizabeth Charlotte Ashton (1866-1945) in the summer of 1900 in the Hackney Registration district, London. Rosina was a nurse/midwife after Joseph died.

Joseph died on 30 May 1909 at Wigston Magna, Leicestershire.