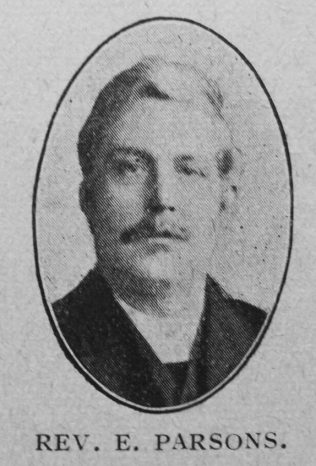 A transcription of the obituary published in the Primitive Methodist Magazine by G.W. King is attached.

King sums Emmanuel upon as follows: “Mr. Parsons was a good man, and a faithful minister of Jesus Christ. The outstanding feature of his life was his zeal for souls, and in every circuit he had the joy of leading large numbers into the light and liberty of the children of God. His sermons were entirely of the evangelical order, and always delivered in the persuasive style. By close attention to the pastoral side of the ministry, as well as by a sunny and cheerful temperament, he endeared himself to the people in all his circuits. By his decease the Church has lost a devoted minister, an evangelist of a high order, a diligent pastor, and one who did a good day’s work.”

Emmanuel was born in 1864 at Gorsty Hill, nr Halesowen, Staffordshire, to parents Joseph, a glass tube welder (1881), and Hannah.

The 1881 census return records Emmanuel as a glass tube screwer.