From his obituary in the PM Magazine, 1889 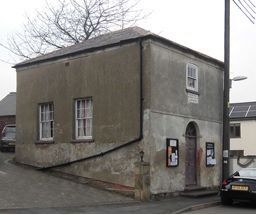 Beginning as a Wesleyan

Henry Pope was  His father ran a farm nearby and we are told that both his parents were respectable God fearing people who endeavoured to give their children a Christian upbringing. The parents were members of the Griffydam chapel which was the only Methodist one in the locality. Sunday, in those days, meant chapel and Henry Pope had happy memories, even in old age, of being a young boy trotting beside his mother going to and from it and holding onto her dress as he tried to keep up with her!

The religious training, his parents’ faith and his mother’s love for the Lord had a lasting impression on him and, on 22nd February 1822 aged 16, he accepted Christ as his Lord and Saviour in the Griffydam chapel For reasons which are unclear, he did not remain with the Wesleyans at Griffydam but immediately joined the Primitive Methodist Society at nearby Worthington who had not long opened a chapel in the village on Main Street. In a strange twist, only just over a decade later the Primitive Methodist chapel became a Wesleyan one!

Young Henry was welcomed with open arms by the Primitives possessing as he did great natural ability and talent and it was not long before he was called upon to use these. The planned preacher was unable to fulfil his appointment and Henry was asked to take his place. We are told he “tremblingly” agreed. So suited to local preaching was he that shortly afterwards the 1823 June Quarterly meeting asked him to become a local preacher. He was diligent in his studies and fully devoted to the work and regarded as the best and ablest of all the local preachers.

At this time, the Ashby de la Zouch circuit was in urgent need of another travelling preacher and Henry was invited to fill the position and he entered the ministry on 31st August 1824 so in just over two and a half years he had progressed from his conversion in a Wesleyan chapel to a trainee minister in the Primitive Methodist Church. On the circuits we are told he was a much loved and hardworking minister. In nine of his circuits – there are no records for his first three – every circuit had an increase in members.

The early years of the Primitive Methodist Connexion were far from easy for travelling preachers. “At that time”, wrote Rev J Bellingham, “the Connexion was one vast missionary organisation, circuits were extensive, journeys long and the preachers suffered from exposure to all kinds of weather. The homes were few and the salary was about fourteen shillings per week. The open air work was very heavy and only a few of the men were able to travel over thirty years.”

Sadly, the Rev Henry Pope was not one of the few. In his thirtieth year of travel his voice failed and he had to seek superannuation. He settled in Bath where he died in 1887 at the age of 82.