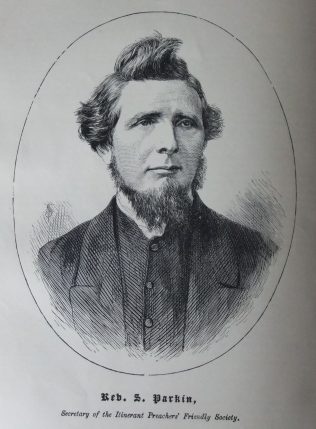 Samuel was born on 5 March 1827 at Derby, Derbyshire. As a child, his parents moved to Ripley, where Samuel stayed until he was 22. Samuel’s parents became Primitive Methodists at Ripley and opened their house for regular preaching services.

Samuel had little or no schooling. At the age of 7, he was sent to work in a brickfield where he carried clay for the brick makers. Samuel was converted early in his life. He became a local preacher and laboured abundantly in the villages around where he lived. His labours were so acceptable that he received a call to ministry in 1850 from the Belper circuit.

Samuel was deeply influenced in his appointment to Mansfield in 1851 by Samuel Antliff, his superintendent, and Joshua Rouse. These friendships deepened Samuel’s search for knowledge. His faovourite branches of study were metaphysics, the languages and Christian theology. He became proficient in Latin, Greek and Hebrew, and could read the bible in French and German.

Soon after going to Lincoln, Samuel and his children were all down with typhoid fever. It was during that time that his wife, Maria, died. Two of his sons became local preachers.

His obituary records that as a preacher he was plain, concise, and serious. His sermons were fine productions. He excelled in expository preaching and did preach Christ crucified.

Samuel married Rebecca Merrin (a close friend of Maria) in 1870 at Nottingham, Nottinghamshire.