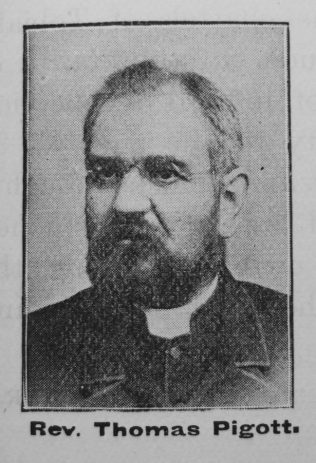 Transcription of Obituary in the Primitive Methodist Magazine by James Keightley

The county of Lincoln has had a large share in the giving of men to the ministry of our beloved Church, and the last year has witnessed the translation of several of them to the higher ministry in the presence of the King. Among these was Thomas Pigott, who was suddenly called away on October 13th, 1902. He was born at Luddington, in the Epworth circuit, on May 7th, 1840. He was the eldest son and second born of ten children. He came of a godly parentage. His father was a man of intelligence and ability above the average of working men, which enabled him to discharge efficiently for many years a responsible parochial office, and win the confidence and esteem of all classes. He was a Free Churchman when it was looked upon by the majority as a discreditable thing, and, at the hands of those whose training and position should have rendered them incapable of it, he suffered considerable indignity and pain at a time when a great sorrow pressed upon him and his. He was a local preacher of more than ordinary ability, and in the courts of the circuit his influence was great, and there is testimony that his influence still lives. He had convictions, and strenuously gave effect to them. It is therefore quite natural that two of his sons should have entered the ranks of our ministry and taken good positions therein. Our brother was converted early, and the reality of his conversion was soon evident, for very shortly afterwards we find him, as a local preacher, publishing the glad evangel of the love of Christ for sinful men.

The blessing of God was upon these early efforts, and many were turned from the error of their ways.

Owing to the affliction of the Rev. J.T. Shepherd, he went to the Doncaster circuit as a hired local preacher, and subsequently, through the illness of the Rev. B. Stansfield, he rendered similar service in the Barton-on-Humber circuit.

He then went to Elmfield College, York, that the lack in his earlier intellectual equipment might be to some extent supplied. Here he came under the direct influence of that most saintly man, the Rev. John Petty. This influence was an abiding force in the making of the man and in determining the character of his ministry. His indebtedness for this was ever gratefully acknowledged. After a term at Elmfield came years of steady, laborious, and successful service in the following circuits:- Gainsborough, Pocklington, Bridlington, Retford (twice), Louth, Barton-on-Humber, North Cave, Wolverhampton, Old Leake (twice), Kidderminster, Eakring, Lincoln first, Newtown, and Sleaford. The work on these circuits was very heavy, involving much physical as well as other labour. He was wholly devoted to his ministerial vocation, and God gave him many tokens of approval. He had entered upon his third year at Sleaford, and had accepted the hearty invitation of the circuit for a fourth year. His mind was full of projects for the welfare of the station, and it seemed probable that had he lived to see these projects accomplished, the circuit would have taken a higher rank in the Connexion than it has had hitherto. But God, in wisdom and in love, has called his labourer to receive his wages. And other hands must take up this work.

Our brother’s removal was solemnly admonitory in its suddenness. For a few days his condition had given anxiety to his wife and others, but there was no thought of the end being near. But so it was, and on Monday, October 13th, at the breaking of the day, “God’s angel touched him, and he slept.” It is well with him where –
“New found strength fills every breast,
Inaction is weariness, labour is rest ”

And our sympathy is for the widow, who through the years of action was his true helpmeet, and the daughter, who will miss him so sorely until the day that shall re-unite them in the land of life unending.

Can we give some estimate of the character and worth of our dear friend?

He was an intelligent and faithful minister of the Word. His early facilities for intellectual culture were not numerous or of a very high order; but, by dint of persistent study, he attained to a fair acquaintance with philosophic and theological problems. His reading was extensive and varied, and though he never paraded his knowledge, his careful study of the vexed questions of criticism kept him calm in the midst of the strife of opinions, and gave him a reserve of strength which made his pulpit ministrations effective. The Rev. T. Campey writes: “I have always regarded him as being a good all-round efficient Methodist minister. His preaching powers were considerable, and his sermons were solid utterances, his style epigrammatic and pungent, having a pleasant flavour and a permanent usefulness. He was a plain man, and believed in saying plain things in a plain way. He was accustomed to call a spade a spade, and sometimes perhaps a characteristic brusqueness of manner made him to be misunderstood, but he was true to the core, and I believe he was incapable of intentional unkindness.”

He was a man of strict moral integrity. He had an utter abhorence of everything of the nature of sham. He could not bear anything shady or unprincipled in any sphere of action. This sometimes brought him into collision with men who were not above doing a mean thing to gain their ends. He would not be silent in the presence of wrong, and therefore he had at times a heavy penalty to pay.

He was tender in heart, but brave and chivalrous in his friendships. Since his decease, many letters have reached his dear ones; on this point they all speak one language. In one instance the writer speaks of a kindly action years ago, that ought to have been acknowledged during life, rather than it should have been left as a flower placed upon his tomb. The Rev. G. Ford, an old colleague, in a most appreciative letter, says in view of friendly service rendered in time of affliction and difficulty, “I always felt I owed him more than I could express. He was a man who would do a kindness and not make you feel that he had done it. I fully endorse what the Rev. W. Clayton  said to me,  ‘If I had to ask a favour of any minister in the Connexion, there is no man to whom I would go so readily as to Thomas Pigott.’”

Our brother was a sturdy Free Churchman. When he went to Sleaford the Free Church Council had been practically dissolved, but largely through his efforts it had been resuscitated, and he was its honorary secretary. Into this work he threw himself with great ardour and enthusiasm, and after his death the following resolution was placed on record:-
“The members of the Sleaford Free Church Council desire to record their deep sense of loss sustained by the death of the Rev. T. Pigott. To his brotherliness, enthusiasm, and energy the Council largely owes its existence, and under his guidance as secretary had the prospect of real usefulness in the cause of the Free Churches.
“The members of the above Council offer their sincere sympathy to his sorrowing widow and family in their bereavement, and affectionately commend them to the God of all comfort and consolation.”

By his faithful ministry extending over 34 years, by his example of sterling integrity, by the never-to-be-forgotten tenderness and faithfulness of his friendships, by the intensity of his devotion to the cause of free religion in this land, and by the tender and helpful ministries to those dearest to him,
“He, being dead, yet speaketh!”

At the close of the December quarterly meeting of the Sleaford Circuit, a memorial service was held, when the church was well filled. The various societies in the station were well represented. The writer officiated. A collection was taken in behalf of a monument in memory of the deceased minister. It is understood that a considerable sum has been collected for this purpose, and that a suitable memorial will be erected in the beautiful cemetery at Sleaford.

May we follow our beloved brother where he followed the Master, and may we at length have the joy of re-union.
“Where fears, and where tears, and where death shall be never,
Christians with Christ shall be soon and for ever”

Thomas was born on 7 May 1840 at Luddington, Lincolnshire, to parents Enoch and Rachel. Enoch worked the land.

Both 1851 and 1861 census returns describe Thomas working the land.

Thomas married Harriet Craddock (1845-1926) in the summer of 1872 at Pocklington, Yorkshire. Census returns identify one child.