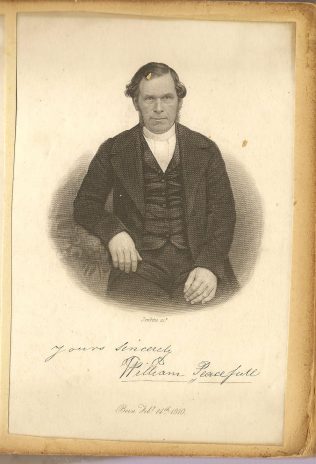 William was born on 14 February 1810 at Wrockwardine to parents John and Elizabeth.

Petty records parts of William’s journal for the time he was conducting missionary activities out of the Shefford circuit.

Sunday, 16 August 1835 – preached at Shrivenham at nine in the morning, at Bourton at half-past ten, at Bishopstone at five in the afternoon, and afterwards spoke at a missionary meeting. He also walked thirteen miles and prayed with eight families.

Next Sunday – preached three times and led a lovefeast.

Sunday 30 August – walked tweleve miles and preached four times in the open air, at Westcott, Farnham, Kingstone, Lisle and Sparsholt. It was quite dark after finishing his last sermon, yet he held a prayer meeting afterwards.

On 16 May 1837, William was preaching at Brill. He was annoyed by some persons who offered him beer to drink and shouted in his ears during the service. While engaged in the final prayer, they poured two buckets of water upon him. The following week, at Chilton, some persecutors threw rotten eggs at him. Despite persecutions the work prospered. In July 1838, at Morton, near Thame, a powerful camp meeting was held.

William died on 27 February 1877 at Wolverhampton.

J Petty, The History of the Primitive Methodist Connexion, 1880, 324f