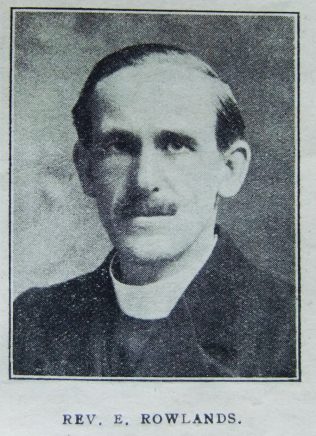 EDWIN ROWLANDS: born Abergavenny in 1888. He was the product of a mining community and it was with something like awe and always in humility that he used to speak of God’s call to him as a pitman to occupy the pulpit. While still in his teens, during the Welsh Revival, he was instrumental through his preaching in winning converts, one of whom was his mother. His first appointment in 1918 as a Primitive Methodist probationer meant for him a return to his native Abergavenny which he had left as a boy of eight. His other circuits were Rhosymedre, Nantwich, Otley and Guiseley, Bishop’s Castle, Oswestry (Chapel Street), Ellesmere Port, Cradley Heath (Christ Church). After four years spent in retirement at Market Drayton, he returned in late 1958 to Cradley Heath, where over a wide area his services were in great demand. The local Free Church Federal Council owes much to his activities and on a number of occasions he represented it at the National Congress. He was a man of strong evangelical faith and his sermons, always thoroughly prepared, were delivered with passion and vigour. He loved people, made countless friends, and was a real pastor. Latterly it was his joy to serve as Chaplain to the physically disabled of the borough where he lived. He died suddenly at Cradley Heath on 14 May 1965, in the seventy-seventh year of his age and the forty-seventh of his ministry.

Edwin was born on 18 October 1888 at Abergavenny, Monmouthshire, to parents Francis and Sarah. Francis was a baker.

Edwin died on 14 May 1965 at Cradley Heath, Staffordshire.