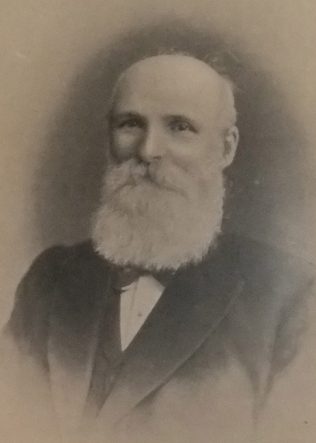 James was born on 29 June 1842 at St Ives, Cornwall. His parents were both Wesleyan and brought up their children in that tradition. James grandfather fought under Nelson at Trafalgar and was apparently the first to render aid to the Admiral when he received his fatal wound.

James had an excellent singing voice and was a member of the Wesleyan choir for many years. When about sixteen, he was lent to the Primitive Methodist choir to assist them in some special singing. He became so attached to the choir and the minister that he settled down as a regular attender of PM services. It was not until October 1861 that James had his conversion experience. That time coincided with a great revival when two hundred were added to the Church.

The circuit was very short of local preachers and James was put on the plan within twelve months as an exhorter. On the first occasion he attempted to preach one person was converted. During his three years as a local preacher many were won to the service of Christ.

Most of James ministry was carried out in the Brinkworth and Bristol districts.

His obituary records that his Celtic fire, allied with evangelistic zeal, made him specially fervent as a preacher and thrilled the hearts of his hearers. He loved class meetings and found much refreshment in this means of grace.

Beside building chapels, he worked hard to relive burdened causes of crushing debts and could justly boast of having raised more money for chapel purposes than he received in salary.

He excelled as a pastor, and his kindly manner and gentle presence and cheering counsel made him beloved in the homes of his people.

After superannuation, James continued to work among the sick and the poor, especially amongst the aged inmates of the Newbury almshouses.

‘With something of startling suddenness, the Rev. J. Richards, of Montague Villas, Gloucester-road, passed away in the course of Friday night. Mr. Richards had been about during the week, attending meetings almost every evening. On Thursday evening, he presided at the Young People’s Meeting, and gave an address on Bunyan’s delectable mountains. On Friday he attended the Ministers’ Fraternal Gathering, which met at the Rev. G.J. Knights. On arriving home he complained of feeling unwell though this was not particularly noticeable, as he had latterly shown signs of failing health, and during the week had sought medical advice. In the course of the night he became worse, and Dr Hickman, who was sent for, pronounced the case to be very serious, and indeed shortly after his arrival, Mr. Richards passed away in the presence of his wife and the Rev. E.G. French, the cause of death being heart failure. His unmarried daughter, Miss Hetha Richards, who was in London, but was about to leave for the north of England, was communicated with, and with her sister, Mrs Foat, reached Newbury in the course of the morning.

The deceased was a native of Cornwall, and was born at St. Ives, on June 29, 1842. Having been found useful as a local preacher, he was designated for the Ministry, and having been accepted by the Conference, he was appointed to Southampton in July, 1865, and laboured in the following circuits: Winchester, Newbury, Motcombe, Stroud, Swindon, Banbury, Aylesbury (second time), Frome, Bath, Knighton, Madeley and Newbury (second time). Throughout his course, Mr Richards has proved himself a useful and earnest minister, conscientious in his work, and loyal to the church of his choice. One of the features of his ministry has been the interest he has shown in building and renovation schemes, and personally he has collected between £2,000 and £3, 000 for Primitive Methodism. He had been elected to the Conference, and also received other marks of confidence and respect from the church. He retired from active work in 1907, since when he has preached occasionally, and been useful in family visitation, particularly when there has been sickness and sorrow.

The funeral took place yesterday (Wednesday), the body being brought to the Primitive Methodist Church, which was filled with a large congregation wearing mourning attire. The introductory sentences were read by the Rev. E. French, and then Whittier’s hymn was sung, “We may not climb the heavenly steeps.” This was followed by the 90th Psalm, read by the Rev. A. Smith, of Swindon. The second hymn was known as Beulah Land, “I’ve reached the land of corn and wine,” and then the Rev. K. Kinnish read a portion of I Corinthians xv.

An address was delivered by the Rev. J. Neville, who said that on account of his long acquaintance with the deceased he had been desired by the family to give utterance to a few words bearing upon his life and character. The deceased spent forty-three years as a minister in the Primitive Methodist Connexion, his work beginning at a time when long journeys had to be travelled on foot, and when stipends paid were very small. It was in 1878 when at Aylesbury, that Mr. Richards became his colleague, and between them they had the oversight of twenty village churches, in addition to the one in the town. He found Mr. Richards to be an earnest, plodding and useful minister. He never allowed himself to be perplexed with the mysteries of the universe, or the more subtle problems associated with the doctrines of God, and the destinies of man. He took the plain facts of nature as they appeared on the surface, and accepted the doctrines of Divine Existence in their plainest evangelical sense. In this way his teaching and preaching met the needs of the greater part of the people to whom he ministered. He devoted himself with rare fidelity to pastoral visitation, and displayed remarkable tact and energy in raising funds for distressed chapels. Only the last week of his existence he collected a sum of £7 for their Centenary effort. Above all this he had a rich Christian experience, and a deep religious devotion. And so in conclusion he said, “Farewell! Farewell James Richards. Farewell brother beloved. Farewell to the one whose name will be a household word and a precious memory in the hearts of hundreds of our poor people for many years to come.

A funeral anthem by the choir, prayer by the Rev. Alfred Smith, of Swindon, and the singing of the hymn. “On Jordan’s stormy banks I stand,” brought the service to a close. On leaving the church for the cemetery a lengthy procession headed the funeral car, consisting of the Free Church ministers of the town, a large number of local preachers, and others. The Rev. E. French and the Rev. J.H.Green took part in the proceedings at the grave, where the hymn “Rock of ages, cleft for me.” was sung.

The mourners were the widow, Miss Richards and Mrs Foat (daughters) and Mr. W. Foat, of Aylesbury. Dr Foat was absent through a delay on the underground railway causing him to miss his train at Paddington.

Several floral tributes were laid on the coffin.

The arrangements were carried out by Mrs. A.J. Chivers, of Cheap-street.