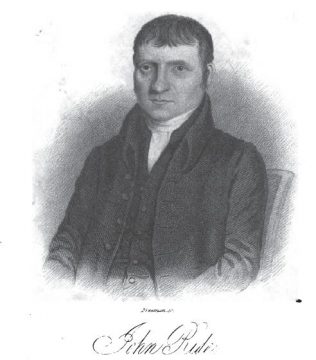 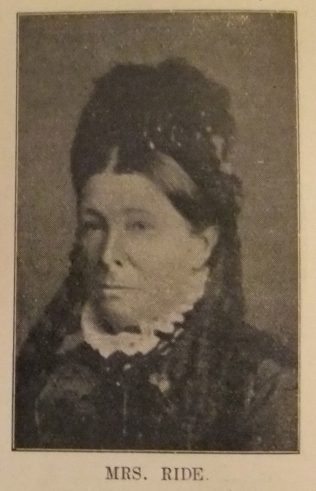 John was born at Turnditch, Derbyshire in 1790. He was baptised at Muggington on 4 April 1790. His parents were John Ride and Hanah Winson.

John was converted under Eleazer Hathorn and received his first class ticket at the same time as Sarah Kirkland. He began to preach around 1816. In 1820 John, and his family, emigrated to the United States. There he lost his wife and soon returned to evangelistic work in Derbyshire.

John was soon employed on the Cheshire mission. He opened Wrexham and found his way to Liverpool, where he was imprisoned for preaching in the open air. After being stationed in Tunstall, he soon moved on to pioneer work in the Brinkworth district, where he became known as the apostle of Wiltshire. He later went on to mission Berkshire with Thomas Russell.

At Mitcheldever in 1834, John Ride and Edward Bishop were imprisoned for holding a missionary meeting on the charge of leading and heading a riotous mob, being armed with bludgeons and obstructing the thoroughfare. When the case eventually came to trial in Winchester it broke down, and the magistrates were reported to be glad to get rid of them!

John was appointed as a visitor of the Home Missions in 1845. Among the regulations for his guidance was one which required him not to arrange work which could not be executed by any man of ordinary mental and physical energy.

After his stay in London he moved to Australia where he continued to work with zeal as a missionary. Eventually failing health necessitated his superannuation.

John Ride was a man of immense energy and zeal for his work. A crude measure of his importance to Primitive Methodism can be simply gauged by the number of references to his work found in Petty and Kendall (see below).

John sent a copy of the regulations for missionaries in the Shefford Circuit to the PM Magazine in 1834. They give a fascinating insight into both the way of life and how the Primitive Methodists were successful through sheer hard work.

John married Martha Doncaster, an Itinerant Minister, on 18 March 1824 at Oakengates. Martha ceased as an itinerant minister in her own right when she married but continued as an active preacher working with John. She died on 12 November 1873 in Brighton, Victoria, Australia. Martha was stationed in Tunstall (1822), Darlaston and Ramsor (6 mths each in 1823) and Oakengates (1824) before her marriage.

John and Martha had eight children.