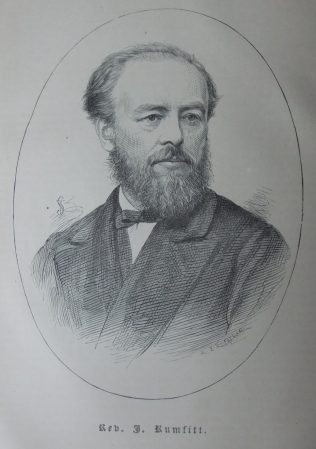 John was born on 14 December 1831 at York to parents William Rumfitt and Ann Yewdall. William was a Deed Poll member of Conference. Prior to joining the ministry, John worked with his father as a joiner and cabinetmaker.

John was converted when aged 15. When aged 17, he was given a note to preach and accompanied Mr G Wade. Having proved himself useful and acceptable to the people, he went on full plan and spent four years as a local preacher. He received his call to the ministry to supply for the late William Green Bellham at Ramsgate and fully entered the ministry the following year.

His obituary records that the pulpit was his throne. Here he was seen at his best, and here were spent his happiest moments. All else was made subservient to this; his mode of living, his reading, his praying, his visiting, his friendships, his recreations, all were arranged to minister to and to increase his power in the pulpit.

But while preaching was work in which he delighted, and for which he ‘spent himself’, he did not overlook the pastoral part of his office. He paid special attention to the sick, the needy and the dying. His general sympathetic disposition made him welcome in the sick room.

H B Kendall, Origin and History of the PM Church, vol 2, p59