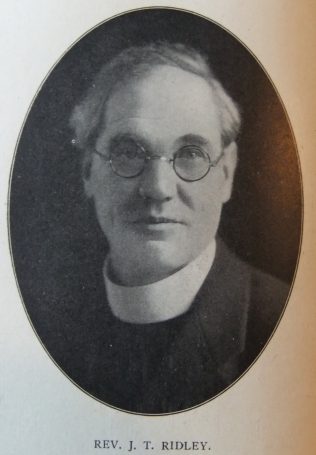 John was born in 1875 at Prudhoe, Northumberland, to parents Thomas and Dorothy. Thomas was a bootmaker. John’s father and grandfather were both local preachers.

John became a local preacher early in life and was recommended for the ministry before he was twenty. Ripon circuit called him to serve as a lay agent. From Ripon, the young evangelist went for a term to Elmfield College before entering Hartley College in 1899.

John spent his probation in the Manchester XI circuit (Unsworth), where the work was difficult but the test was met. However, overwork induced a long illness.

Throughout his ministry John laboured under the disability of a deafness which in his college days troubled him and rapidly increased. This thorn in his flesh, however, was not allowed to stand in the way of the work to which he knew God had called him.

His particular genius, though he served in many town churches, was for the building up of country causes and the creation of new churches, often in places which others had thought to be barren soil. This genius was perhaps nowhere more clearly demonstrated than in the ten years he spent at Chatham, The real reason for his success was his unremitting zeal as a pastor. He was much beloved by his people and a welcome visitor in their homes, where his gentleness and cheerfulness were always a source of great encouragement.

On becoming a supernumerary in 1943, he undertook for four years the pastoral charge at Box in the Bath circuit.