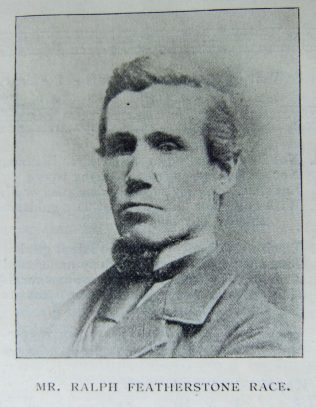 THOUGH the memoir of Mr. Ralph Featherstone Race will appear in due time in the Aldersgate magazine, he has served his Connexion and Church so long and faithfully that the readers of the Messenger will welcome a brief notice of his useful career.

Not only Teesdale Methodism, but Primitive Methodism, generally, is the poorer for the death of Ralph Featherstone Race, which took place on January 20th, 1901. He was a lay-preacher of considerable mental force and culture, and eminent pulpit powers. He was the youngest son of Joseph and Isabella Race, and was born at Seldom Seen, Harwood, on February 8th, 1835. His mother’s maiden name was Featherstone, and she was a native of Upper Weardale. Mr. Race owed much to his mother. She is described by one who knew her well as ‘An exceptionally fine woman in her position in society. She had a fine, tall presence, an active brain, and an earnest, devout spirit.’ How much Ralph Featherstone Race owed to that mother cannot be definitely stated. From her he inherited an active mind, a love of reading, and a quenchless thirst for knowledge. Her devout and saintly life was the most potent influence in leading him to full decision for Christ. His conversion took place when he was about 15 years of age. He at once joined the Primitive Methodist Church, and from that day to the day of his death his whole life was consecrated to its service. When about 17 years of age, Mr. Race commenced to preach the Gospel of Jesus Christ to others. He was an excellent preacher, and in order that Christ should have of the best, he studied hard to fit himself for public speaking. Besides being a diligent student of the Word of God, he read extensively of the best literature. In sermon literature his choice authors seem to have been F.W. Robertson, of Brighton, and Dr. A. Maclaren, of Manchester. He read with interest and appreciation the works of Dr. Joseph Cook, of Boston, and the late Professor Drummond. He took a deep interest in the history of the great Methodist Churches, and at the time of his death he was engaged in re-reading Dr. Gregory’s ‘Sidelights on the Conflicts of Methodism.’

The Rev. F. Watson says: ‘Mr. Race put a very high estimate on the work of the Christian ministry, and studied to show himself approved unto God, a workman that needed not to be ashamed. He carefully prepared himself for his pulpit work and kept his own mind fresh and vigorous to the last by the study of the best literature. The last book that I supplied him with, about three weeks before his death, was ‘The Ascent of Man,’ by the late Professor Drummond. He was a student to the last, and this gave to his ministry a continuous freshness and vigour, a kind of perennial youth. In Mr. Race’s preaching there was the happy combination of intellectual vigour, intense emotion, and practical truth.‘

The Rev. W.A. French, of Shildon, says of him: ‘In the death of Featherstone Race, of Harwood, Teesdale has lost one of its most discerning and intelligent Dalesmen, and the Primitive Methodist Church a loyal member and one who has served the Church with conspicuous ability for many years as a local preacher. He was a keen observer of men and things, and a true lover of a good book and a thinker of considerable merit. To find him with you in any disputed matter of Church administration at once gave you confidence that the point would be settled to your satisfaction, but to find him against you was enough to give you pause. He loved the Primitive Methodist Church, delighted in its prosperity, held in the highest esteem the ministers, and ever regarded it as a privilege and an honour when called upon to fill the position of delegate to District Meeting and Conference. I count it as one of my special privileges to have known him, to have had the pleasure of his intellectual and spiritual fellowship, and to have sojourned in his hospitable home that was ever open to the minister of his Church.’

Ralph was baptised on 17 March 1835 at Middleton-in-Teesdale. His parents were Joseph, a lead miner, and Isabella.

He briefly served as a travelling preacher in 1856.