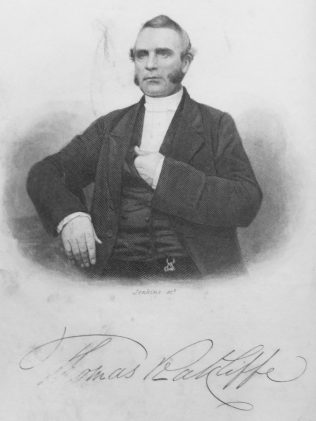 Transcription of obituary published in the Minutes of Conference by H. Cooke

THOMAS RATCLIFFE began his mortal life on the 16th of December, 1809, at the small but pleasant village of Askwith, situate on the North side of Wharfedale, about three miles West of the town of Otley.

Although he owned himself greatly indebted to his maternal grandfather for his early religious impressions, yet he was not brought to the crisis of conversion till he sat under the ministry of that holy and devout man of God, the Rev. Atkinson Smith. This important event occurred at  the beginning of the year 1832, and in the year 1834 he entered upon the active duties of the itinerant ministry, which duties he continued to perform with varying success till the year 1867, when, by reason of bronchial affection and other infirmities, he was superannuated.

A few months before his death he removed from Hull to Harrogate in the hope that he might derive some benefit from the mineral waters of the Iatter place; but from the time of his removal he gradually sank, until his spirit returned to God on the 11th of March, 1880, and his dust now sleeps in the beautiful little cemetery of the far-famed inland Yorkshire watering-place.

Thomas was born on 16 December 1808 at Askwith, Yorkshire. His father was John Ratcliffe. He was baptised at Weston, Yorkshire on 15 January 1809.

H B Kendall, Origin and History of the PM Church, vol 2, p75

J Petty, The History of the Primitive Methodist Connexion, 1880, p503

Note: Thomas’ baptism record identifies he was born in 1808, not 1809 at stated in the obituary.