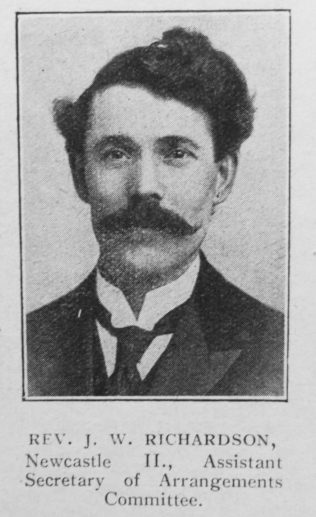 JACOB WILLIAM RICHARDSON; born at Castle Eden, near Hartlepool, Co. Durham, on 7th June 1882, The eldest son of a pitman, he knew poverty and the hardships of confrontation with coal owners, when unions were young, At an early age he showed a gift for painting and dreamed of a career in art. Economic realities prevailed and he began work in the token cabin at the pithead, moving later to a co-operative society clerkship, from which he was called to the ministry, entering via Hartley College in 1907.

As a pastor he inspired affection everywhere, supported and encouraged by Mary, his wife, who was greatly missed on her death, after 62 years of marriage, in 1974, His preaching was personal, out of a depth of spirituality; social justice was a constant theme and he painted word pictures as vivid as his work in water colour and oils.

As a journalist he wrote regularly for the Primitive Methodist Leader, reporting the proceedings of Conference and reviewing the annual Royal Academy Exhibition, He contributed also to the Holborn Review and published several books of religious essays, children’s stories and religious drama, notably Our of the Whirlwind, based on the Book of Job.

His last years were hampered by deafness and growing weakness, but he charmed all who. visited him with his humour, his handsome, bearded presence, the lilt in his voice and the stories he told of his youth and prime. He died in hospital at North Shields on 6th. May 1975 in the ninety-third year of his age and the sixty-eighth year of his ministry.

Before entering the ministry Jacob worked as an assistant in a hardware store (1901).

Jacob died on 6 May 1975 at North Shields, Newcastle upon Tyne, Northumberland.