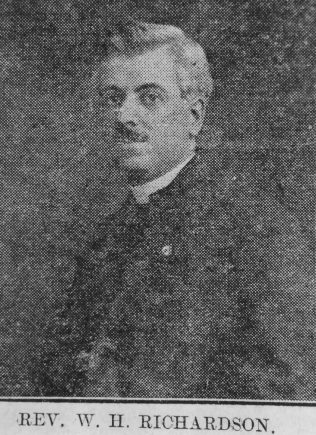 WILLIAM HENRY RICHARDSON: born 1880 at Beverley. He was accepted for the Ministry in 1907 and after his term of studentship at Hartley College he served in Custom House, Glasgow, Tetney, Nuneaton, Wolverhampton, Leek, Stafford, London, Ashton-under-Lyne, Wolverton, Belper, and Sudbury.

He possessed a deep sense of vocation in all things attempted for the extension of God’s Kingdom. He was a thoughtful and sincere preacher of the Word. His kindly care for the people under his charge has left an abiding testimony among many. The circuits in which he travelled are richer in spiritual values as a result of the loyalty and love expressed in all his pastoral work. In pre-union days he held a number of District offices, which he graced with worthy administrative gifts.

In his years of retirement he continued to keep abreast of modern thought in the care with which he selected his reading. During this period he renewed his membership with the Church of his boyhood and continued to contribute gifts of leadership in the fellowship of Christian Endeavour and of the Church. He died on the 25th May 1956, in the seventy-sixth year of his age and the forty-ninth of his ministry.

The 1901 census records William as a printer’s apprentice.

William died on 25 May 1956 at Westwood Hospital, Beverley, Yorkshire.