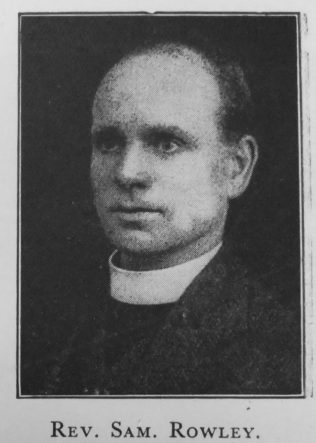 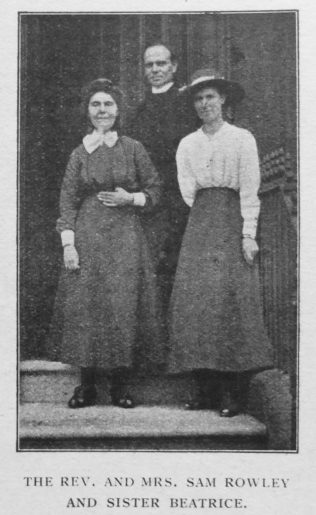 SAM ROWLEY: born at Linton, Derbyshire in 1882. The son of a mining family he moved to Normanton and from there was accepted for the Primitive Methodist Ministry in 1907. After training at Hartley College he served his probation at Ludlow and Birmingham. Already it had become apparent that he had outstanding gifts as a missioner and after serving two years in the South Yorkshire Coalfields Mission he devoted the next thirty years to a memorable ministry at Bradford Central Hall and the London Missions.

Greatly exhausted by untiring labours on behalf of service men during the war and those made homeless through air raids, he spent the last six years of his ministry at Bramley, Swindon and Hull. He became a supernumerary in 1950, retiring to Nuthall near Nottingham, and later to Morecambe where he died.

At the height of his powers his name and reputation as a missioner were known far and wide. He was a most interesting and attractive speaker, and any meeting was always enlivened by his appearance. On the occasions when he addressed Conference, his wit, humour and passionate forthrightness always made a great impression. He never lost the common touch and could get alongside men under any conditions. His was a courageous and cheerful ministry and his vigorous life was matched by a homely and kindly manner that endeared him to all. He was a keen Temperance worker and an earnest advocate for all forms of social improvement. For many years he served the Primitive Methodist Church as Connexional Temperance Secretary and after Union he was a member of the Connexional Christian Citizenship Committee.

He died on 20 May 1961, in the seventy-ninth year of his age and the fifty-third of his ministry.

He married Annie Wilby Sutcliffe (1882-1966) in late 1914 in the Wakefield Registration District, Yorkshire.