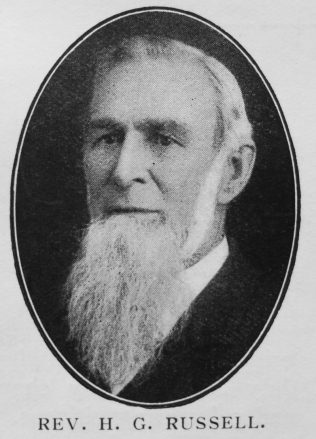 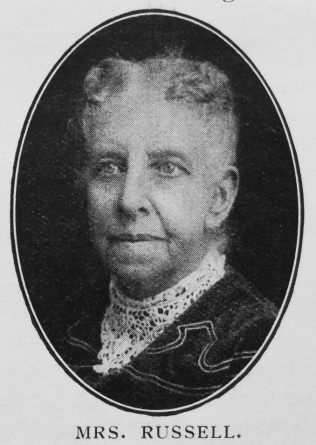 ONE of the hardest working, and most successful ministers of the Primitive Methodist Pennsylvania Conference, U.S.A., is the man whose portrait adorns this page, who, with his now sainted wife, has laboured and prayed, and succeeded in God’s work, on the various stations to which they were sent by the Annual Conferences.

In their youth they both resided at Tredegar, Mon., England, Mrs. Russell’s maiden name being Martha Hambly: she was one of a numerous family, whose parents were in moderately good circumstances, and belonged to the Wesleyan Methodist Church. They both attended the Primitive Methodist Sabbath School and Chapel at the above-named place; they were both converted in their ’teens; both sang in the choir, and both taught classes in the Sabbath School. On May 19th, 1862,  they became yoked together in marital  relationship, and their subsequent life has been one of the greatest confidence in, and the greatest blessing to each other.

In 1869 they came to America, and settled at Scranton, Pa. There were no Primitive Methodists in the Wyoming or Lackawanna valleys at that time, and they did a wise thing in joining the Methodist Protestant Church—the church nearest in polity to their own beloved denomination. In 1872 Bro. Russell was ordained to the work of the Christian ministry by the Conference of the M.P. Church. But, subsequently, hearing that there were Primitive Methodists in the State of Pennsylvania, he sought affiliation with them, and was received by the Conference of 1874.

For the last thirty-four years Bro. and Sister Russell have toiled early and late, often weary in the work, but never tired of it; but always rejoicing that the work was succeeding, notwithstanding their own privations and hardships. The story of the labours of these people may well be denominated a “Romance of Primitive Methodism,” as much so as some of those whose doings have deservedly been chronicled in the magnificent “History of the Primitive Methodist Church” by Rev. H.B. Kendall, B.A., and the more recent Hartley Lecture by Rev. J. Ritson. Our Brother and Sister Russell have been in labours more abundant, and of them it may be truly said, as was said of the great Master Himself, they “went about doing good”; and for plodding, persevering, earnest devotion, they have had very few equals in American Primitive Methodism. The story of their labours, as well as that of others, has an honourable place in the “History of Primitive Methodism in the United States,” by the late Rev. John H. Acornley, D.D.

Some men are magnified by office, like the reflection of a convex mirror, and they appear disproportioned and unnatural; but Bro. Russell, on the contrary, magnifies his office, and is natural and sincere, simple and candid, free and outspoken. He is advancing in life; he has passed the meridian, and his sun is declining: but his trust in God is firm and unyielding.

On August 10th, 1909, the partner of his joys and sorrows for well on to fifty years passed into the home beyond, leaving a vacancy that can never be filled. She lived a beautiful life, consecrated to the service of her Lord. She laboured hard for the various interests of the Church, and was highly esteemed by a wide circle of friends.

It was a great joy to her in late years that one of her sons (Rev. W. H. Russell, who is serving our Hazleton Church for the ninth year) had been called into the work of the ministry, had made full proof of his calling, and was succeeding in his work. She had an intense love for the work of God, which was evident even to the last. She frequently expressed a strong desire to get back to the work, and to see a blessed revival of religion. Still, she was perfectly resigned to the will of God, in any case. A few days before the end came, she said to her husband: “Pa, I am going to leave you. My children will miss me, but their loss will be my gain. O! Pa, I would like to live for your sake, but never mind, the separation will not be for long and it’s all right.” She sweetly fell asleep in Jesus, and went home to God on the date named.

Funeral services were conducted by Rev. D. Savage, assisted by Revs. W. Bentley, J. Moore, and the writer; and the remains were interred in the Mt. Greenwood Cemetery, near to the city of Wilkes-Barre, Pa., where she awaits the trump of the archangel on the morning of the Resurrection.

Before leaving the U.K. Henry worked as a blacksmith. In 1870,  Henry is described as a machinist.

He married Martha Hambley on 19 May 1862 at Bedwelty, Monmouthshire. Martha was born at Tredegar, Monmouthshire, to parents John, an engineer (1851) and Martha. She was baptised on 12 February 1843. Martha died on 10 August 1909 at Wilkes-Barre Luzerne County, Pennsylvania, USA. Records identify eight children.