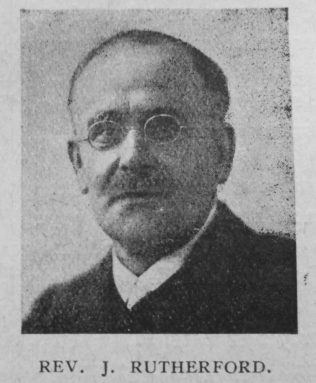 JOSEPH RUTHERFORD: born at Wearhead in 1866. He sprang from sturdy dales-folk, and early showed their characteristic independence of thought and judgment. In 1903 he was accepted as a special Candidate by the Primitive Methodist Church, and spent the thirty-two years of his ministry in seven circuits. A great reader and a deep thinker, he developed a fine gift of exposition. He sought out and assisted likely students wherever he went. He was a prince among preachers, and all who heard felt that they had been made partakers of his spiritual life.

In June 1934 he was laid aside by serious illness, bravely borne, and though he was able to resume his work for a time, his strength gradually failed and he died on April 3, 1935, at the age of sixty-nine.

Census returns identify the following occupations for James before he entered the ministry.

He married Mary Jane Charlton (1864-1907) in early 1894 in the Hexham Registration District, Northumberland.