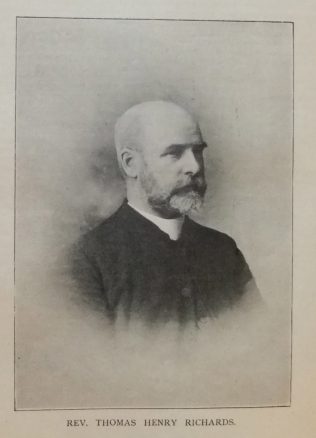 Thomas was born on 4 January 1846 at Rippingale, Lincolnshire to parents John and Jane. John was a farmer, able local preacher and efficient class-leader. The family home was the home of travelling and local preachers. The travelling preachers often stayed several nights together using it as a base to reach surrounding villages.

Thomas gave his life to God at the age of twelve. He dedicated himself to learning, especially the study of the Scriptures. He started to preach when aged fourteen. At that age he was sent to study at Corby Grammar School, Grantham. He developed through the school and became an assistant master until he entered the ministry.

As a preacher, Thomas was useful rather than brilliant or popular. His preaching was mainly expository, but with a distinctly spiritual tone and purpose. Sound scholarship, wide reading, and earnest and life-ling study of the Scriptures underpinned his richly instructive ministry.

For more than twelve years Thomas contributed a great portion of the material for the Teacher’s Assistant.

In 1899, Thomas was appointed as Secretary and Convener of a Special Committee for the preparation of a Connexional Catechism.

England’s light-bringer: or, the story of the English bible

Handbook of introduction to the books of the New Testament, 1902

Thomas married Sophia Swallow, nee Law, (b1848) in early 1894 at Liverpool, Lancashire. Sophia was the widow of Rev Thomas Swallow, a PM Minister.