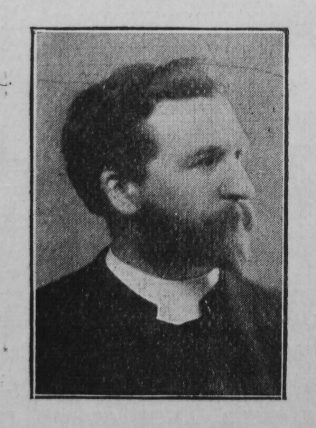 Thomas. J Raybould was born at Bilston, Staffordshire, on September 21st, 1871. He was a Primitive Methodist of the third generation, and under deeply spiritual influences in his home grew into a Christian. “He seemed always to be good and to do good,” and when fourteen years of age made full consecration of his life to Jesus. At Bilston he received his primary education, entering business when twelve years old, and being engaged at Bilston, London, and Derby. Leisure hours were devoted to classes and study, and he mastered several languages, reading and speaking fluently,

French, German, and Spanish. He also became a proficient shorthand writer, and might, had he chosen, have had a lucrative post on the reporting staff of one of the High Courts of Justice. At Derby he entered earnestly into every department of work at the central church, and here, in the School and Mutual Improvement Class, gained his power of public speech. Steadily he won his way to the full plan, and then was called by his church to the ministry. His passion for service and deep love of missions were now the dominant features of his life, and he had no uncertainty that his call was of God, for he knew he was called to a post on the frontier, – work on the foreign field. District exams were passed, a place secured on the pass list, but through some mistake his name was omitted from the College list, and all vacancies had been filled. Mr. Raybould’s case was brought before the Committee, and on his offering to provide lodgings outside the College, they admitted him as a student. Here he found congenial comrades, and entered with zest into the life of the College. He worked methodically and carefully at the set course of studies, and in addition, entered whole-heartedly into the other activities of the students. The passion for missions led to his appointment in his first year as assistant secretary to the Students’ African Missions Effort; and that year the anniversary broke all previous records The second year he was secretary and the proceeds went up a further £70, said to be due largely to his energy, enthusiasm and organisation. Beside this he quickened mission interest in the lives of many of the men. The College magazine – “The Alexandrian” – begun in his time, found in him a valued contributor. He was well-equipped for this work, published interviews with leaders of thought and action, and continued writing articles for Connexional and other papers up to the close of his life.

After Manchester he went to Livingstone College, London, for a year’s medical training. A cosmopolitan group of men, missionaries, or prospective missionaries, were taking the course. The work was hard, but much joy was found in a companionship that deepened conviction, and contributed no little to enlargement of view.

On September 16th, 1899, Mr. Raybould sailed for Africa, his destination being Aliwal North, there to prepare for work in Mashukulumbweland. The outbreak of the war altered all plans, and for two years the Zambesi party was detained at Aliwal. They saw much of the fighting, Allwal North itself being held by the Boers four months. Amidst much anxiety and peril, the work was carried on. The nature of the work usually done may be judged from a resumé taken from a letter of that time.

1. “Five mornings weekly, from 6-45 to1. p.m. are spent in teaching in the training school. 2. Two or three evenings weekly are spent in European meetings, with boys. Prayers always. Frequent English Bible lessons. 3. Occasional afternoons spent in the carpenter’s shop. 4. Preparation for Sunday services, a European, or a native service. 5. Occasional week-ends away for services (at out stations) involving three days. 6. Languages. Three Sesuto lessons weekly. Three Kaffir lessons weekly. Sesuto conversation lessons daily.” Services were conducted “at Location Church, Native Church, Half-Caste Church, and European Church – a constant cycle – kept us busy all the time. Occasional patients for medicine, or dentistry, or little operations.” The strenuous life is illustrated here, and the word of the General Committee’s Resolution is fully borne out that “in the brief time of preparation for work on the Zambesi, which he spent at Aliwal North, it is stated that he worked without stint or measure.”

In October, 1900, Miss Mosley joined him, and at Capetown faithful love found its consummation in what seemed an ideal marriage union. Mrs. Raybould was fitted in every way for missionary work; natural ability, true worth, and deep devotion being supplemented by the qualifications of a certificated teacher, and studies in ambulance and nursing. On the testimony of the late Rev. R.W. Burnett (then Missionary Secretary) it is asserted that no two workers on our missions had gone out so well prepared, and high hopes were held concerning their work. After a brief stay at Aliwal North, the Zambesi party proceeded North, and all went well till Buluwayo was reached. Here Mr. Raybould was stricken down by sunstroke. The return was imperative, and in a day a life’s work seemed undone. The Rev. E.W. Smith accompanied Mr. and Mrs. Raybould to Capetown, and the return home was safely accomplished, though at what bitter cost none can tell. The first home news was of the sudden death of Mr. Raybould, Senr., in the Central Church, Derby. This accentuated the shock, and yet so anxious was Mr. Raybould for service, that very soon, without prolonged rest, he was doing circuit work at Northwood, and in his short stay there, put in much useful and fruitful work.

In 1902 he was stationed at St. Neots. Here he planned to make the Circuit self-supporting. The Harvest Festivals increased 50 per cent. on any previous year. Special efforts were successfully worked, at six out of seven churches, and over £300, in excess of the ordinary income, raised in the first year of his ministry. This, in an agricultural district in a bad year, is a remarkable evidence of success in work and organisation. Periods of illness recurring, the Conference, of 1903 gave Mr. Raybould a year’s rest, and appointed him an assistant. He used this opportunity for the good of the Circuit. Lectures, missions, classes, and private tuition kept him busy, and the material and spiritual interests went forward; the winter’s session seeing nearly one hundred converts on the Circuit, a further result being that, owing to his in?uence, Primitive Methodism in St. Neots and district stands higher than it has done for many years. Strength seemed to be returning, and his messages were better appreciated this year than ay any time, by his people. On Sunday, April 3rd, he preached an Easter sermon, attended a meeting on Monday, on Tuesday was taken ill, though no serious consequences were feared, but on Saturday, April 9th, early in the morning, the heart failed, and he passed peacefully away in the arms of his wife. Such, in outline, are the facts of his earthly ministry. The influence he had on men, and the spirit of his life are more difficult to record. To many men he will stand as the man most like his Master they have known. The Rev. E.B. Storr wrote of him: “Tom Raybould was one of the truest gentlemen; and one of the finest Christians, and one of the bravest heroes it has been my privilege to know. No man ever knew him do a mean act, or violate a principle.” Another friend called him “Sir Galahad,” “whose strength was as the strength of ten, because his heart was pure.” A third says, “that to have shared his love was a very sacrament,” whilst by the writer, his memory will be ever cherished, as that of the man, who, more than any other, made it easy to believe in goodness and in the possibility of living the Christ-life among men.

The outstanding characteristics of his life account for his force and power.

Loyalty marked him in all his relationships – to God, home, friends, and all he touched. Knowing the truth, he would at any cost do his duty. Genial and kindly, he was charitable in his judgment of others, but strict in viewing his own motives and actions, and unmovable from what he held to be the right position. He had a passion for humanity, which led to a complete self-abandonment. He forgot himself in his desire to aid others, and was ever ready to give his best for a good cause, or for the needy. A Christian enthusiast, foreign missions had the central place in his thought and love. Hence he gave his strength, and undoubtedly, his life for Africa, and to the work there with intense yearning he desired to return.

He had high conceptions of life, and looking for the best in men, he found and indicated to many, more good than they had known, and so aided them towards the ideal. He was no cynic, but knowing the wrongs of life, he scorned its meanness and was roused to indignation by what was dishonourable. Acute in his sensitiveness, and of finest feeling in matters of faith and honour, he was tender, courteous, and chivalrous. “A beautiful behaviour ” marked him, for he was gentle and considerate, beyond the thought of many men. Yet with his gentleness he had stalwartness. His physique was robust and sturdy, and was a fit symbol of the inner spirit. “Bravest, truest, choicest heart that over I knew ” was Mr. Storr’s tribute in his character-sketch in the “Missionary Record.”

“He was sure of God” and from this certitude derived great hope and buoyancy. That hope was sure and steadfast. The words spoken the last evening of his life were typical:
“Say not ‘Good-night,’
But in some fairer clime –
Bid me ‘Good morning.’”

In sure and certain hope of a resurrection to eternal life he passed home. The funeral took place at St. Neots on April 12th. The attendance was the largest known for twenty years and included representatives from the General Committee, District and Circuit Courts, the local churches and organisations, and all the Free Church ministers of the town. An impressive service was held in the Wesleyan Church, and here as at the memorial services, the following Sunday, many felt that the brief full life would abide in living memories and influences in other lives, aiding to quicken faith and develop sterling character. When the shadows have passed, and the eternal day breaks we hope to bid him “Good-morning.”

Thomas was born at Bilston, Staffordshire, to parents Joseph, a commission agent (1881), and Jane.

I have not been able to identify the Christian name of his wife.