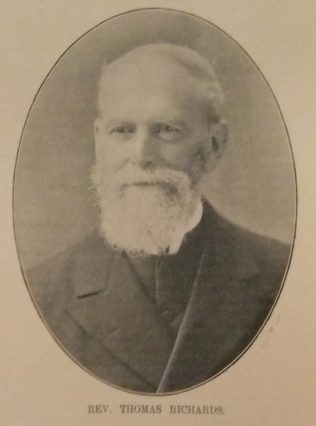 Thomas was born on 12 July 1841 at Priest Weston, Shropshire to parents Samuel and Esther. Samuel was a labourer and grocer.

Thomas was brought up attending the Calvinistic Methodist Chapel. He was converted through the ministry of Rev. J Huff. Soon after he began to preach and at once manifested more than ordinary power. He was invited to join the Calvinistic Methodist Ministry, but he declined in favour of the Primitive Methodists. He did not enter the ministry immediately having decided to enter business and marry, but at the age of thirty was compelled to yield to the call to ministry from his home circuit.

The 1871 census identifies Thomas as a tailor, grocer and Methodist local preacher.

Thomas was District Secretary in the Tunstall, Nottingham and West Midlands Districts for fifteen years and was Missionary Secretary for four years.

In his obituary, Mr J Dodds is quoted as writing; “in the Midlands he was the prince of special preachers, and crowds flocked to hear him as he unfolded his mighty themes,” and “ that the regal splendour of his subjects would invest the personality of this gifted preacher until he became transfigured.”

His business aptitude was not confined to the courts of the Connexion. Thomas had a love of nature and of animals. His expert knowledge of the farming industry was often gratuitously used in assisting a farmer in his difficulty or the selection of his stock.

Thomas was forced to seek superannuation in 1910 following a nervous breakdown.