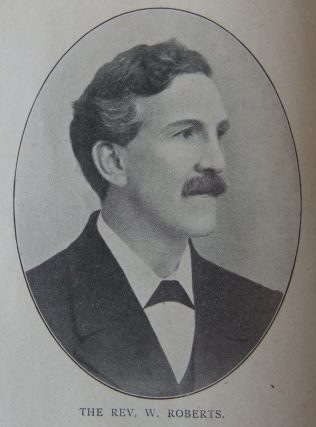 William was born in 1865 at Cefn Bychan, Denbighshire, to parents John and Harriet. John was a forgeman (1871) and died when William was four years old.

William began work at the Acrefair Ironworks at the age of nine. When he was fourteen, he moved to Lancashire and then on to Yorkshire, where he became a miner. It was while working as a miner that William was converted to Christ, and joined the PM Church at Outwood in the Wakefield Circuit. Twelve months later he commenced to preach, and was so successful in soul-winning that he was urged to devote himself to evangelistic work. Though a married man with two children, he decided to do so, and accepted the position of District Evangelist under the Liverpool District Missionary Committee.

For fifteen months, William laboured amongst the navvies on the Manchester Ship Canal, with his headquarters at Ellesmere Port.

In 1891, the General Missionary Committee sent William to Forest Gate to establish a new cause. He commenced without a member and his first congregation consisted of four persons only, but in two years Forest Gate became a self-supporting station. He was received into the ministry in 1892.

William was essentially an evangelist. He loved to proclaim the evangel of the grace of God, and was quite at home in a prayer meeting where sinners were seeking the Saviour. He could both preach and sing the Gospel, and often did both with telling effect.

His obituary record that the qualities which endeared him to his people were his kindliness, his understanding, his patience and his unfailing sense of humour.

In 1935, William accepted the pastorate of the Sanctuary at Whitley Village, surrey, where he brought hope and consolation to the sick and aged. After eleven years of memorable work, he finally retired on the last Sunday of September 1946.