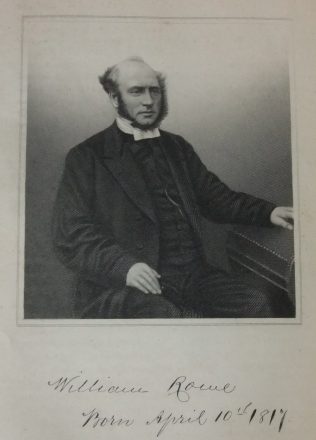 William was born on 10 April 1817 at Wootton, Staffordshire. He was baptised on 11 May 1817 at Ellastone, Staffordshire. His parents, Thomas Rowe and Mary Finney, were farmers and attendees of the established church. The family moved to Thornton Hough on the Wirral when William was a child.

When young, William was ‘full of frolic and mischief’. Looking to find a source of mirth he went to a Primitive Methodist service at Willaston, Wirral. He found himself converted rather than finding a joke on 10 April 1834 and immediately joined the society at Willaston.

He was a local preacher for five years.  William declined two invitations to ministry before his own circuit Chester convinced him to become one of their ministers.

William’s first appointment outside his own circuit was to the Preston Brook mission.

His obituary records that he had a strong constitution. His sanguine temperament inclined him to look at the bright side of things. Hence he was cheerful in circumstances that would have made men of a different make-up gloomy and sad.

He was an orthodox Methodist in doctrine and an ardent temperance reformer. His sermons were not dry scholarly essays, but direct and pointed appeals to the understanding , conscience and emotions of his hearers.

William was President of Conference in 1874 and Secretary of the Connexional  Missionary Committee 1874-1878.