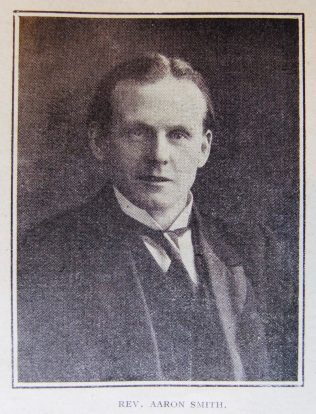 AARON SMITH: born at Houghton-le-Spring, Durham, in 1880. After training at Hartley College, he entered the Primitive Methodist ministry and was stationed at Workington. Later he went to Canterbury and from thence to Burnley, Birkenhead, Douglas, Blackburn, and Church Gresley circuits. In 1933 he became superintendent of Cannock circuit, and after five years in this appointment became Chairman of the Wolverhampton and Shrewsbury District, serving with distinction in this respect for twelve years until his retirement in 1950. His years as chairman covered the period of the war, and those who recall the difficulties of travel will be able to assess the problems and the measure of his success in overcoming them, in that travelling widely in service of the churches, he seldom missed an appointment. His gracious disposition was such that he not only won the affection of the ministers under his supervision, but their complete confidence by his outstanding and discreet administrative ability. Ministers found him to be a wise counsellor and the warmest of friends. Indeed, the supreme expression of his vocation was in the knowledge and love of people. As the years passed there developed a noticeable charm and serenity about his nature, the outward manifestation of a man deeply spiritual and fully committed to God. His reading was purposeful and was meant to strengthen his witness in the pulpit and to make more effective his teaching of those whose pastoral interests he had at heart. Some of the most treasured memories belong to the years of retirement in Cannock. Here, he seemed to expand rather than diminish his pastoral work, and whilst the time came when he could no longer visit people in their homes, they came to him and thus his ministry continued until a few days before his death. From the beginning to the end of his ministry he sought God’s will for himself and its out-working in life and testimony amongst the people within his care. He died in the early hours of 31st May 1958, in his seventy-eighth year, and the fifty-fourth of his ministry.

Note: “Who’s Who in Methodism”, 1933 reports that Aaron had one son and one daughter. I have not been able to identify them unambiguously from birth records on-line.