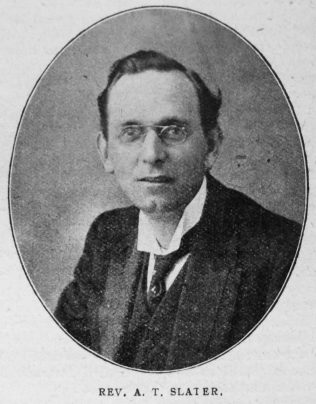 ARTHUR THOMAS SLATER: born at Wolstanton, Staffordshire, in 1886. Gratefully he remembered the Methodist influences which helped to mould his childhood and youth, and also his training at Hartley College. Twenty-six years of his active ministry were spent at two towns, seventeen at Dover and nine at Fleetwood. In all his circuits – Ryde and Ventnor, Stratford, Oakham, Forest Gate, Bradfield, Dover (London Rd), Northampton (Kettering Rd), Fleetwood, Dover – he won the affection and gratitude of officials and members. He retired to Northampton where he had previously exercised a fruitful ministry. In District and Connexional life he readily shared. His sagacity and geniality made him a valuable committee man. In the Christian Endeavour Movement he was a zealous leader, and as Secretary of the Holiday Tour Department in Primitive Methodism he organized tours in many European countries mainly for young people. He travelled widely and geography was one of his special interests. In civic affairs he was active, having been a member of Public Assistance Committees and of local Education Committees. By nature he was richly endowed. He had a noble bearing an a pleasant presence and voice. He was cultured in mind and spirit and in disposition was warm-hearted, gentle and self-effacing. His conduct of worship and preaching evidenced thorough preparation and also his joy as a messenger of God’s grace. His compassion and understanding made him a diligent pastor. ‘He was a living sermon of the truth he taught.’ By his guidance and example others were inspired to become preachers and some entered the ministry. He maintained a lively interest in theological trends and in the affairs of his beloved Methodism. The reality of his Christian experience shone brightly in the serenity of his old age and in his approach to death. After months of physical weakness borne with exemplary courage and cheerfulness he died in the home he loved on 26 March 1970, in the eighty-fourth year of his age and the fifty-ninth of his ministry.

Arthur was born in 1886 at Wolstanton, Staffordshire, to parents Thomas and Annie. Thomas was a platelayer.

Before entering the ministry Arthur worked as a railway clerk.