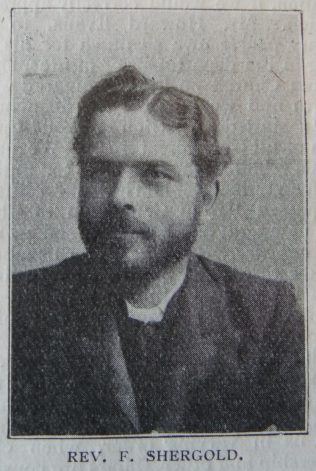 Frank was born in 1857 at Woodfalls, Wiltshire, to parents John and Harriet. John worked the land.

Frank began his public career as a boy preacher at the age of sixteen in the Salisbury Circuit.

At Dunstable, Frank faced difficulties with an invincible faith and commendable courage. Within seven years a new manse was built, two churches renovated, a new chapel built at Toddington, and the whole circuit raised to a position of great prosperity.

His obituary records that he served with distinction as secretary of District Orphanage Committees and Education Committees. During his stay at Folkstone, Frank was President of the Free Church Council.

On superannuation, Frank went to Bognor, where he took pastoral oversight He soon endeared himself to the hearts of the people and became popular in the town.

He was a Christian gentleman, saintly in character, and devoted to his Lord. His devotion was thorough, and his character beyond reproach. His preaching was of the cultured, evangelical type. He was possessed with a passion for souls, and was never happier than when he was leading someone into the ‘marvellous’ Light. His winsome personality, his sympathetic heart, and evangelical fervour made him a vigorous and successful winner of souls.

Frank died on 18 September 1921. He suffered a heart attack and died in the vestry at Bognor, shortly after the evening service.