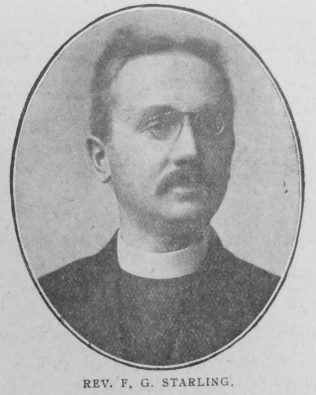 Transcription of a Sketch in the Christian Messenger by J.G. Bowran

It is a great pleasure to write about Mr. Starling and his wife. Mr. Starling is an East Anglian, being born at Swaffham, and entering the ministry from that Circuit. He began his ministry at Thetford, but finished his probation at Crowle, Lincolnshire. For four years he was the Superintendent of the Brigg Circuit, where he had unusual Circuit prosperity. A beautiful village chapel was built at Cadney. After four years at Winterton, an adjoining circuit, he came back to Thetford in 1914.

At Thetford we have one of the strongest of our churches in East Anglia, and occupy the leading position in the town among the Free Churches. The chapel seats five hundred persons, and there is good school accommodation. Land, however, has also been purchased for the erection, by-and-by, of an up-to-date school property. A manse adjoining the Church property has also been secured. Early in the War, Thetford became a military centre, and, under the guidance and inspiration of Mr. Starling, our Church began social work among the men. Throughout the winter months socials, concerts, and all forms of recreation have been carried on. On Sunday afternoons and evenings tea and supper are provided at cost price, and often from five hundred to seven hundred men are catered for. During the winter also, a soldiers’ sing-song precedes the evening service. In this way the Supplement has been popularised among the soldiers. The weekly C.E. meeting is arranged almost entirely by the soldiers. They also serve in the choir. In this connection we must mention Air-Mechanic A. M. Vaux, of South Bank. We knew Mr. Vaux before the war, when he was the organist of our Church at South Bank. He plays the organ each Sunday evening at Thetford. He has organised many fine concerts, and this winter the choir rendered the “Messiah” and also the “Crucifixion.” The Church is often filled before the evening service begins, and it is quite a common thing for the regular seat-holders to have to worship elsewhere for the simple reason that the Chapel is crowded. Our Church is known as the “Soldiers’ Church.”

It is easy to see how busily employed Mr. Starling must be. He is the officiating clergyman to the United Army Board troops. He conducts or arranges for three parade services each Sunday morning. It is quite a common thing for him to preach four times on a Sunday. In all this he is assisted by his capable and devoted wife. All our officials and members co-operate with them and have won the gratitude, not only of the men who are stationed at Thetford, but of their many friends in all parts of the Connexion.

FREDERICK GEORGE STARLING : born at Swaffham, Norfolk in 1877. After training he entered the Primitive Methodist Ministry in 1903. All his circuits have been in the Eastern and Midland counties. He was ever a loyal and staunch colleague, warm-hearted and kind, and was loved in all his circuits. As a pastor his ministrations were marked by sympathetic understanding and insight ; as a preacher he was earnest, thoughtful, and deeply spiritual; he always gave thoughtful attention to business, and was wise in judgment. His passion to serve led him to give without stint of his mental and physical powers; and with those who suffered and sorrowed it could be said of him that “he sat where they sat,” and such a sympathy took a heavy toll of his powers of soul and body. He knew the struggles of the working classes, and these always had his sympathy and help. His was a well-stored mind, and his spirit disciplined in prayer. Affliction compelled his retirement in 1941. He bore increasing weakness with fine courage, and after many weeks of pain, which included a serious operation, nobly borne, he passed peacefully to the reward of God’s nearer presence on May 13, 1944, in the sixty-seventh year of his age and the fortieth of his ministry.

Frederick’s birth was registered in late 1876 at Swaffham. His parents were Robert, an agricultural labourer, and Elizabeth.