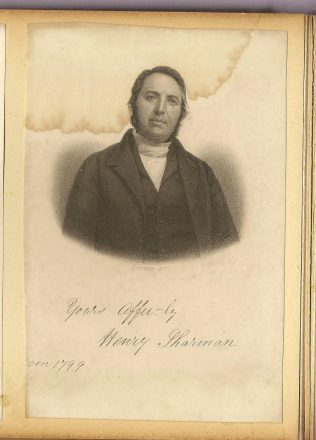 Henry was born on 9 May 1799 at Clipsham, Rutland, the 6th son of Robert Sharman (1755-1822) and Mary Maxey (1764-1829). Henry was converted as a result of attending the Buckminster Camp Meeting on 31 August 1817. William Clowes, John Benton and John Wedgwood were at that meeting, Wedgwood shortly after being released from jail in Grantham. Henry dedicated himself to the work of God at that meeting, although his entry into the ministry was deferred until 1823. Prior to entering the ministry, Henry worked as a book-keeper in a silk factory at Congleton.

In the summer of 1823, Henry was sent to the Isle of Man and was an integral part of the team that missioned the island. He spent about 12 months there. (See Curry for a fuller description of his work and extracts from his journal.)

The following anecdote comes from Henry’s time at Motcombe.
‘ Gaining a foothold for the cause was not always easy, but persistence was sometimes rewarded. A hard community to enter was the little Wiltshire town of Mere, with about 3,000 inhabitants. Success was eventually achieved in 1844, after the Wesleyans and the Primitives had been trying for fifteen years. A Primitive Methodist itinerant preacher, Henry Sharman, with supporters from Motcombe, processed through the streets one October evening, and the marchers were invited into a cottage, where Sharman preached. Rapid success led to the formation of a society and a search for a larger, rented venue. There were so many conversions that ‘penitents’ had to meet in the mornings at a private house.’

Having started his work on the Isle of Man, Henry’s last stations were on the Channel Islands.

His obituary records; ‘ Thus for thirty years he was a superintendent preacher, built many chapels, preachers’ houses and schoolrooms, and in a majority of cases he left his circuits better off numerically and financially than he found them. Personally he was much beloved for his consistent life, for his amiability of disposition, for the Christian patience and resignation with which he endured persecution and poverty, and for the unflagging zeal he exhibited in his Master’s service. It was only when the physical infirmities incident to advancing years crept upon him that he appealed to Conference for that relief from active labour which they acceded to him.’

W Curry, The Story of Primitive Methodism in the Isle of Man

Mission from Motcombe , Proceedings of Wesley History Society, Vol 54, May 2003