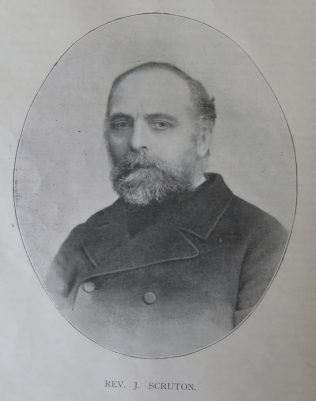 John was born on 23 February 1841 at Hutton Cranswick, Yorkshire to parents Robert Scruton and Catherine Petch. Robert worked the land. Both parents were Primitive Methodists.

John was converted on 3 February 1856 under the ministry of Rev Thomas Greenbury. He had just started as an apprentice to Mr Robert Drosser, a tailor, grocer and draper, who was also a local preacher. John lived with the Drosser family for 6 years.

John served as a General Committee delegate and attended conference on four occasions.

As a preacher he thought out his own discourses on his own lines, his manner in the pulpit was peculiarly his own. His preaching was always useful and frequently very powerful.

Christians and politics, or, the duty of Christians in relation to politics, with special reference to household suffrage and county franchise , 1844

John died on 1 December 1919 at the Cottage Hospital, Driffield.