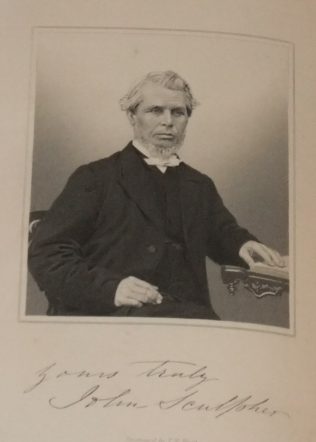 John was born in 1817 at Castleacre, Norfolk to parents George and Frances. He was baptised in 13 April 1817 at Castleacre. John’s parents were poor but installed in the family true religion and total abstinence from strong drink. John was the eldest of 14 children.

John was converted aged 16 and joined the PM Society at Rougham in the Lynn circuit. He received his first class ticket in November 1833 and went on the plan as an exhorter in 1836.

John was called to ministry by the Upwell circuit in 1840 and spent his entire ministry in his native district of Norwich.

As a preacher he was not widely known beyond his district, but he was an exceedingly useful Primitive Methodist Minister, loyal to the Connexion, both in doctrine and discipline. Usefulness was more to him than popularity, and steady, plodding work in his circuits, in the pulpit and houses of the people, much more to his taste than ‘Specials’.

His sermons, however, were well arranged, full of sound gospel truths and teaching.