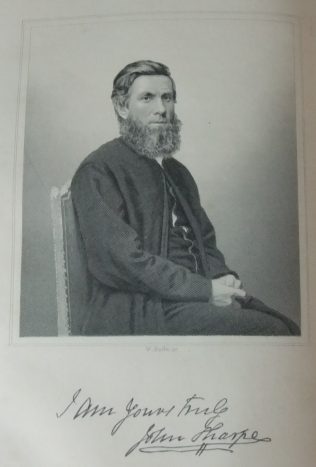 John was born on 25 December 1820 at Distington, Cumberland. The son of Primitive Methodist parents, John was converted at a camp meeting at the age of 18.

John was appointed to New South Wales, arriving in Sydney on 23 Mar 1854. He revived a feeble Primitive Methodist cause founded in the colony in 1845, and for the next 20 years he provided effective leadership. He encouraged the growth of churches in Sydney, Parramatta, Newcastle and country centres in the colony, and in Melbourne and Launceston. He was a man of deep piety, an able preacher whose preaching was expository, a splendid administrator and an indefatigable worker. He was a disciplinarian, possessing a strong will, and yet courteous in all his bearing. Concerned about people living in Sydney’s slums and the spiritual destitution of people in remote places, Sharpe worked to provide them with a Christian ministry.

Sharpe helped to establish temperance societies in many centres. He criticised the Drunkards Punishment Act (1866), and identified with the New South Wales Alliance for the Suppression of Intemperance formed in 1857 for the ‘social, moral and intellectual elevation of the people’. A pungent writer, he wrote articles to the Protestant Standard opposing Roman Catholic teaching, and articles and letters in the daily press criticising the white man’s treatment of aborigines, and strongly opposing capital punishment. He founded and edited the New South Wales Primitive Methodist Messenger, and in 1871 published The Young Minister Counselled.

Through his ministry many were converted, the church progressed, and by 1874 Primitive Methodists had fifteen circuits in NSW.

His obituary records that he was remembered as one of the most popular of the pioneers of Primitive Methodism in Australia. In the pulpit his great gift was exegesis. His preaching was invariably of the expository type, and was always instructive and edifying.

John died on 27 May 1895 at Hensingham, Whitehaven, Cumberland.

J Petty, The History of the Primitive Methodist Connexion, 1880, p530