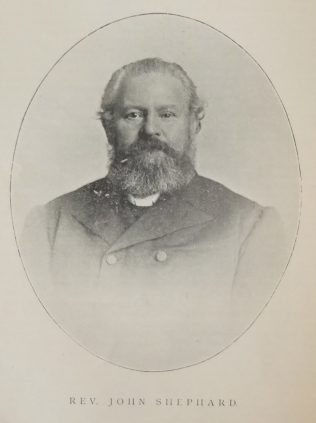 John was born on 28 June 1842 at Madeley, Shropshire to parents John Shephard and Frances Ball. His brother, Joseph, was also a PM Minister.

John was apprenticed to the drapery business at Hill Top, Staffordshire. He also spent some time working as a coal miner.

John was converted aged 17 and with two years entered the ministry.

His obituary records that John was possessed of great determination and gentleness, he was a man of most courteous manners. He was a preacher and lecturer of great power, he combined thought, imagination and eloquence with a magnetic personality. Vast congregations were held and swayed under his ministry. At one church he conducted Anniversary Service for over fifty consecutive years.

In the Sheffield District, John was for many years District Furnishing Committee Secretary and Treasurer of the district African Missionary Fund, also representing the District on the General Missionary Committee and Church Extension Fund Committee.