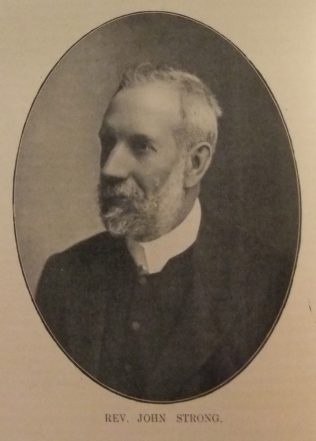 John was born in 1846 at Consett, Co Durham to parents Nicholas strong and Margaret Arkless. His father was a miner. The family moved to Burnopfield Colliery when John was a child. It was there that John attended Sunday School and at eleven years of age dedicated his life to Jesus. He became a Sunday School teacher and afterwards superintendent of the school. John was also requested to accompany Mr Thomas Hetherington, local preacher, to his appointments. He served as a local preacher for two and half years before attending the Sunderland Theological Institute.

John’s obituary records that in most of his circuits he saw many conversions and much financial prosperity. He was always patient, cheerful and resourceful, and so was able to triumph over all difficulties. John excelled in pastoral visitation, and in many homes he was remembered for the tidings he brought of the eternal love and care.

In retirement at Hull, John rendered service as Chaplain at the Anlaby Road Poor Law Institution and at the Willerby Asylum.