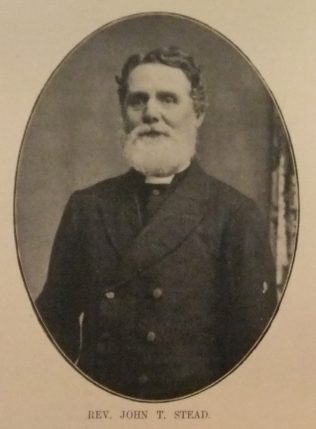 John was born in 1847 at Holbeck, Leeds, Yorkshire to parents Thomas and Martha. He was one of eight children.

At the age of nine, John started work in am large iron works at Oldham, Lancashire. So poor was the family, his mother was unable to provide decent clothing, so John attended a ragged school. With an improvement in family circumstance, John became a scholar in Hope Congregational Sunday school. He was induced to join a Band of Hope and signed the pledge in 1858. A year later, his mother placed him under the care of grand-parents at Canny Hill, near Bishop Auckland, and it was while attending a Wesleyan lovefeast that his heart was given to the Lord.

Returning to Oldham, John was invited to attend the Lees Road PM Sunday School and he also united with the Church. His name appeared on the preaching plan when he was seventeen years old.

John held the secretaryships of the Furnishing, Orphanage, Building, District and Centenary Committees at various times.

John was described as an all round man – earnest and practical in the pulpit, distinctly evangelical and decidedly Methodistic, attentive to official duties, faithful in the administration of Connexional rule and in the exercise of discipline, frequently in the homes of his people and inspiring in his example to faith and good works.