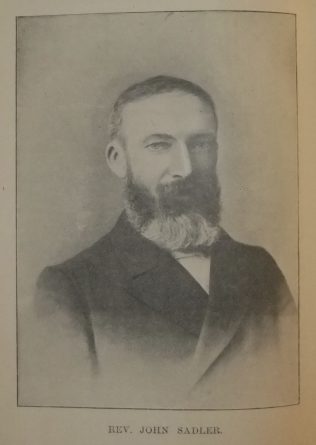 John was born on 11 June 1846 at Huxley, nr Chester, Cheshire to parents John Sadler and Martha Findlow. His father was a farmer. The Sadler family home received many travelling preachers. Sampson Turner preached under an elm tree in front of the house and was instrumental in the conversion of John’s father in 1819. Hugh Bourne also visited the house on several occasions. William Sanders composed many of his poems and hymns there and John, senior, copied many of them out for him.

When aged fourteen, John moved to Manchester to learn a business. Letters from his sister were instrumental in his committing to be a disciple of Christ. John began to work in the Sunday School and helped with house-to-house visitation. He preached his first sermon when aged fifteen at Clotton, whilst at home on a holiday. Five people were converted as a result. The Chester circuit recommended him for ministry. John spent a year at Elmfield under the tuition of John Petty before entering circuit ministry.

His obituary records that John had his share of chapel building, and raising funds to meet liabilities; he took his part nobly in public life, but preaching was his true function and delight.

John died on 17 April 1924 at Tarvin, Cheshire. He was laid to rest in his own village of Huxley.